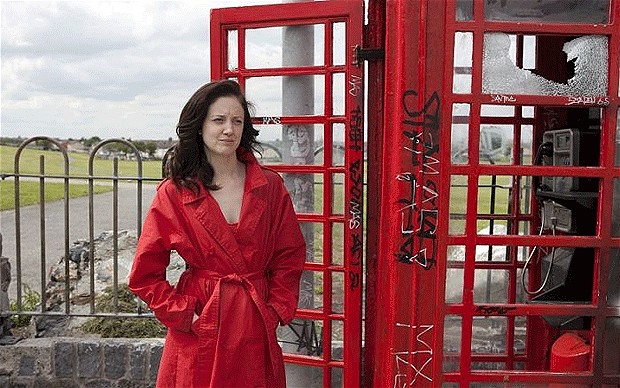 For a political thriller, Shadow Dancer contains very few obvious thrills. About a Belfast family targeted by the British intelligence agency MI6 during the last months of the Struggles, it contains no sex scenes, few laughs, only a handful of chase scenes, and no clear-cut good guys. And despite the fact that this Belfast was actually shot in Dublin, it is a study in institutional drab rather than the rolling green we Americans tend to expect from our Irish movies.

Andrea Riseborough stars as Collette McVeigh, a single mother whose little brother was killed in a bombing when she was a kid. Now she and her remaining brothers—Connor (Domhnall Gleeson) and Gery (Aiden Gillen, best known to Wire fans as Mayor Carcetti)—avenge his memory by fighting for the IRA. Central to this film is the varying degrees to which she, her brothers, and mother can rationalize their actions, and the dangerous family tensions that result. Those tensions are put to the test when Collette is caught by MI6 agent Mac (Clive Owen, at his beleaguered best) and becomes a double agent so she can remain with her son.

This a film whose strength is its weakness: a restraint that at time devolves into a lazy ambiguity, albeit one offering unique, and very timely, insight into the queasy marriage of blood ties and radical politics. The issue at hand may be the conflict between the Republicans and Loyalists in Northern Ireland, but insights offered by this film apply to the recent bombings in Boston by the Tsarnaev brothers.

Part of why these truths can be extrapolated is because Shadow doesn’t get hung up on the facts. It eschews historical references and political editorializing in order to focus upon the conflicting loyalties of the McVeigh family—there’s no ambiguity in that name— rather than the conflict itself. (It is likely that lack of political affiliation helped the filmmakers score its BBC and American funding.)

Tom Bradby, who reported on Northern Ireland for years before writing the novel upon which he based this screenplay, has said, “Writing this was an opportunity to explore some aspects of the conflict you couldn’t put on the TV news at night.” Certainly fiction can be the best way to get at the deeper truths of a politically charged situation since it’s unfettered by loyalties to real people or even real events. Some of the best insights we’ve gained about the Vietnam War, for example, have arguably been achieved through such feature films as Platoon and Apocalypse Now. (Admittedly I’m still waiting for good narrative film about the events of 9/11.)

Both Bradby and director James Marsh, best known for such documentaries as the terrific Man on Wire as well as Project Nim, have deftly navigated the line between fact and fiction throughout their careers. The success of Marsh’s documentaries largely stems from how much he actively shapes his found material, constructing a much more bona-fide movie experience than most documentaries offer. In Shadow Dancer, however, he draws upon his documentary background to impart a gritty realism to this fiction. He resists genre formulas, opting instead for a narrative and aesthetic unpredictability that keep us as unsettled as the films’ characters are. For the most part he forgoes a steady cam, opting instead for unusual angles and backdrops. Rather than quick, Bourne-style jump cuts, he deploys unhurried edits and lingering images. Interrogations take place in hotel rooms and confrontations are held by the sea rather than in the cop stations and brick housing projects that are by now visual clichés of IRA movies. Dickon Hinchliffe’s moody, unobtrusive score supplants a bombastic rock soundtrack. And rather than succumbing to some pretty grappling beneath cool linen sheets, Mac and Collette merely share one messy kiss that may or may not be genuinely romantic.

The ambiguity of those visuals do supply some neat tricks. Drawn curtains abound, not only suggesting that everyone is hiding but, by creating dim interiors, that that no one can see the whole situation clearly. And Collette’s red trench coat is all the more dramatic against the film’s otherwise unwavering washed-out grey and beiges. She looks like the bloodstain she may as well be. 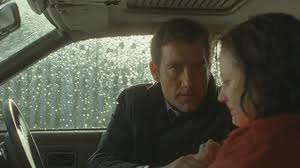 Which brings me to Collette herself. I’m not entirely sure of her agenda or real feelings even at the film’s end, which, without much apparent benefit, was reportedly rewritten at the last minute during the shoot. But I am sure that Andrea Riseborough does the best she can with what she’s given (which is more than in Oblivion, in which she plays Tom Cruise’s Stepford soldier wife). With powerfully subtle body language, she keeps us on our toes without ever uttering so much as a full paragraph. In fact, the first five minutes of the film she’s almost entirely silent. Marsh has said he just followed her through a subway system in one take with very little rehearsing or a gameplan. Though her ability to pull that off demonstrates a wonderful self-possession, it also calls into question whether the film’s overall ambiguity is deliberate or, more likely, defacto.

Ah, well. Though it’s wonderful to see Owen in a real performance—he’s commendably half a step behind, for a change—and wonderful to revisit Gillian Anderson, back in intelligence mode as Mac’s slow-blinking supervisor, this film raises more questions than answers. Theoretically that’s a good quality in a film that tackles such high-stake real-life issues. But I’ve discussed it now in two vastly different contexts—on the review show Talking Pictures and at a post-screening conversation hosted by the Westchester cinema club— and one thing is clear. It’s not just that neither my colleagues nor the Yonkers cinephiles really got what was happening. (The unsubtitled Irish English didn’t help.) It’s that few felt invested enough to delve into any real debate. Alas, despite its talented cast and crew, Shadow Dancer is, as my grandmother used to say, not much to write home about.
.

My Testament: Fiona Shaw’s Mary Is Not My Mary
The Church of Harriet the Spy