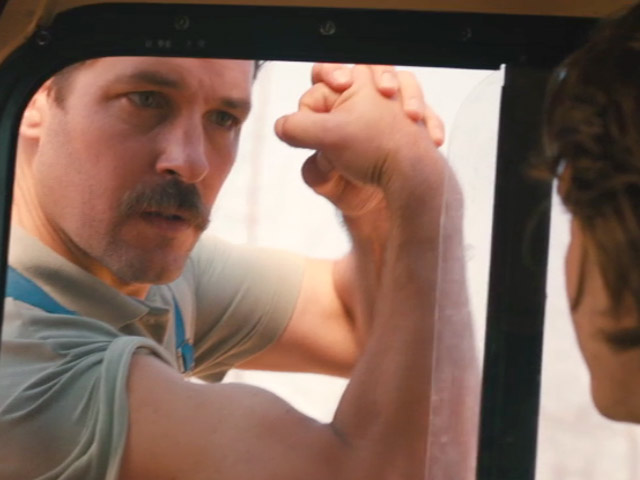 Prince Avalanche begins as silently as any of David Gordon Green’s films do: with footage of the forest fire-ravaged 1988 Texas landscape, followed by the figures of two men wordlessly performing roadwork in the same area. The images are lovely and terrible, lackadaisical and strained—the oddly comforting dissonance that characterizes all of Green’s dramas.

But as the film revs up, the THC-inspired goofiness of his comedies The Pineapple Express and Your Highness quickly creeps in. The two men are Alvin (Paul Rudd) and Lance (Emile Hirsch), and we grasp their Abbot and Costello dynamics long before we sort out any other details of their relationship. While tasked with repairing the roads in the region, they are roughing it in the wilderness. Alvin, older, heftier, and more self-possessed, gently bosses Lance, who seems impervious to everything above the waist. (You know you’re dealing with unusually short men when Rudd looms as the big man in the duo.) While Alvin writes letters and studies German, Lance flips through comic books. While Alvin sleeps in their shared tent, Lance jerks off. The elder’s Achille’s heel reveals itself soon enough, however: It’s Madison, Lance’s sister, whom Alvin loves but also has fled. In his own way, Alvin is at least as much of a fuckup as Lance, whom he has speculated may be “mildly retarded.”

When the weekend arrives, Lance hightails it back to town in the hopes of getting laid, and Alvin basks in his solitude. He fishes; he reads; he wanders through the woods, a reverie of saturated greens and rust colors. And it’s at that point that Paul Rudd, rather than Alvin, begins to shimmer into focus. For Alvin gets silly as only Rudd can: He flops in the water. He does a weird jig. He juts his hip out at a crazy angle. He is, in other words, too cartoonlishly outsized to read legibly as a guy foolish only in his degree of anal-retentiveness—a guy who has sought a Thoreau-like isolation to cool his dangerous temper. Alvin may be slotted as the straight man in this mundo bizarro but Rudd can’t help but put a wag in his tail.

Would this be a different film if Rudd had not been cast? Of course. Though David Gordon Green has worked with big names in his serious films before (Zoe Deschanel and Kate Beckinsale, to name just a few), they’ve always been more than capable of an appropriately muted melancholy. (In Snow Angels, even Amy Sedaris dialed it down effectively.) Rudd is not, though I’m a fan of his buffoonery when he appears in an actual comedy. Here his mugging dooms the film to a shrill mania, a tone fundamentally at odds with the gentle interrogations into nature, human and otherwise, that Green always poses. 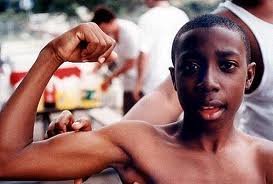 Quiet, droll, and sweetly shaggy, David Gordon Green’s films set the tone for truly independent film in the aughts when he released George Washington, his first feature, in 2000. It’s hard to remember now but when he came along, independent film had stalled out to the point that what passed as indies were too-chatty Woody Allen wannabes and Quentin Tarantino-inspired shoot’em-ups. Given that Allen and Tarantino are already quintessentially derivative filmmakers, it was a truly sorry state of affairs.

In contrast, George Washington, along with his sophomore effort All the Real Girls, felt refreshingly “found.” Unequivocally Southern and unequivocally working-class, his films were the cinematic equivalent of alt-country music; they lowered the blood pressure as they opened the senses, including the third eye. Along with the works of Andrew Bujalski (whose Funny Ha was released in 2003), they launched a new esthetic of doggedly awkward authenticity. Forget mumblecore; it was all bumblecore.

The many filmmakers who followed in their footsteps were, for the most part, eminently worthy: the Duplass Brothers, Joe Swanberg, Jeff Nichols, Lynn Shelton, Alex Karpovsky, Greta Gerwig, to name a few. Some of them found footing as actors as well (most notably Gerwig) and many more produced each other’s work, almost always for little more than a sawbuck. For nearly a decade, it seemed like a new American cinema movement had been born that genuinely worked well outside the Hollywood system, especially since it proved savvy in terms of finding new delivery systems. I’m less sure of that fact now.

In my gig at Talking Pictures on Demand, I review these bumblecores nearly every week since so many of them are released on an on-demand platform. And I’ve come to the unfortunate conclusion that the ones boasting stars—the sort who are looking to establish their chops in a break from their usual TV shows and comic book adaptations—are usually the worse of the lot. Swanberg’s Drinking Buddies, Shelton’s Your Sister’s Sister and now Prince Avalanche, for example, all suffer from a cast of actors who are too charismatic for their characters’ good. Oh, the irony: their presence likely helps the filmmakers land bigger budgets and better distribution yet renders the films’ premises nearly moot.

Take Drinking Buddies. About colleagues who are attracted to each other but already in relationships with other people, it is the stuff of which bumblecore is made. But given that the collegues in question are played by the aptly named Olivia Wilde(cat) and New Girl’s cutie Jake Johnson, their awkward hesitancy is hard to buy. A pity, as the premise would have been so palatable in the hands of such quintessential bumblers as Karpovsky, Paul Schneider, and Greta Gerwig (who’s largely foundered in more mainstream projects). In Your Sister’s Sister, the naturally glamorous Emily Blunt, a classic Hollywood dame if ever there were one, cringes as if she’s been physically shrunk into the self-conscious codependent she’s portraying in this dramedy of errors. Interestingly, with her sad eyes and skeptical manner, Rosemarie DeWitt shines in such subtle material as this film, though she can seem a bit hawkish in bigger-budget fare.

Some directors’ scope have grown along with their casts, of course. Nichols’ latest, Mud, about a pair of renegade lovers who upend everyone in their paths, would not thrill nearly as much if it did not draw upon the voltage of Matthew McConaughey and Reese Witherspoon, both of whom live up to their early promise in this film. But with Rudd at its center, Prince Avalanche has no such luck. At best, it is an atonal prose poem that never finds a melody.

On Living Softly, and Not Having a Big Stick
The Church of Italian Men: The Creature