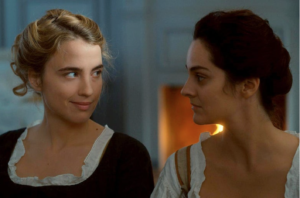 This sets the tone for this film, not only in terms of how largely absent men are—this is the last time we see one until nearly the end—but in terms of the female determination that defines this story.

It’s a determination that exists both before and behind the lens, as does the beautiful reciprocation of female desire. Writer and director Céline Sciamma—known in France for her films Girlhood and Water Lilies— based this story on the largely forgotten female painters of the era who made a living as Marianne does—that is, as portraitists and by painting other subjects under male names. Also—gossip alert!–director Celine has been the lover of Adèle Haenel, who plays Heloise, the aristocrat betrothed to the same unseen Milanese man as the one to whom her deceased sister was first betrothed.

This introduces another layer to the love story of this film, which is not based on hierarchies of power and seduction so much as reciprocated passion. For these are not women who swoon. Rather, these are women who are grimly aware of the limited control they wield over their own fate as they claim each other with clear-eyed, rational concentration.

So much is made today of what is known as the “male gaze”—of male perceptions and perspectives, and the women objectified by them. But this film focuses almost entirely upon the female gaze. Even in the very beginning, Marianne is teaching an art class to female students—teaching women, in other words, how to share their gaze, which one of them slyly turns back on the broken heart of her teacher. Notice in that scene how the portrait of Heloise looms. Even there, she is not a caught object so much as a subject presiding over her kingdom.

Both before and behind the lens of this film, all women—whether maid or aristocrat or cinematographer or painter—enjoy agency. Thus during the window of time that Heloise, Marianne, and servant Sophie (Luàna Bajrami) share on this literal island, it is not about how they preen and are preyed upon. It is not even exactly about stolen moments. Rather, it’s about moments carved out of time by a desire not only for each other but to preserve their shared freedom through memory and art. 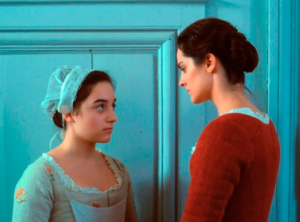 Though this is a world strictly defined by patriarchy, it is also utopian—both a perfect place and an unreal place. For the love these women have created is pure and uncompromised, and Celine’s craftwork takes its cues. Nearly all shots are as carefully composed and as still as the portrait Marianne stealthily paints, and the dearth of dissolves between sequences maintains that decorous detachment.

The use of music and art and costumes and literature also help, for this film, like these ladies’ love, is grounded in a creative economy that is as fierce as it is fleeting and fragile.

Because these are not people drowning in today’s glut of information, their few books enjoy a heightened importance–readings from Ovid about the ill-fated love of Orpheus and Eurydice, no less! Similarly there is no score, only the rhythm of their blossoming affair and the few snatches of diegetic music punctuating a voluptuous silence: the harpsichord, the swelling of the summer movement of Vivaldi’s Four Seasons, and that fireside song performed acapella by all those women. The Latin phrase they are singing: “fugere non possum,”— literally, “we cannot escape.” Though within the capsule of this film, there may be nowhere they’d rather be.

In deference to this feminist utopia, strong female collaborators abound behind camera –from the carefully calibrated and colored costumes by Dorothée Garoo—Marianne’s dresses even have pockets, that ultimate feminist fashion accessory–to the painterly cinematography by Claire Mathon. Even the paintings themselves are by 30-year-old Hélène Delmaire, a contemporary artist trained in 18th century techniques.

Thus we do not see women as men see them so much as how other women see them—and how they themselves see.

Consider, for example, how Heloise is introduced 20 minutes into the film–with a long travelling shot from Marianne’s point of view as she follows the former woman’s hooded figure as they walk separately toward the sea. Then the two sit side by side on the sand, while the camera as Marianne steals glances at Héloïse, who, along with the camera, steals glances back at Marianne until they lock in a gaze sparked by an intoxicating recognition.

The women only truly come together after they’re on equal footing–when Heloise is aware she is being painted and wields some control over how she is being portrayed; when Marianne is no longer hiding anything and is free to gaze and paint as she chooses. Their mutual attraction powers the film’s central light.

Only then does the stiff tableaux of the two women’s face-to-face stares and side-by-side dialogues shifts into kinetically and erotically charged play–both unnatural and utterly authentic. Though we see half-naked bodies all the time in modern cinema, these ladies’ exposed skin is almost as much a revelation to us as it is to them—the glamor of mutual, long-anticipated disclosure.
It helps that both are wonderfully physical actors — 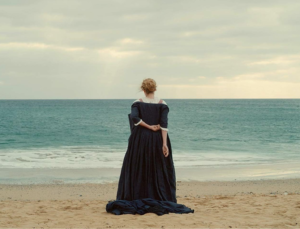 graceful, nonverbally expressive, resolute. There are few working performers who could pull off that last shot of Heloise surrendering to the full orchestral rendering of that Vivaldi concerto. As Marianne we watch her relive their affair’s pleasure, loss, communion, and it is heartbreaking and fully out of time.

She is lost in the memory but not lost to us and not to herself–love being the ultimate compass in the wild.

Portrait of a Lady on Fire is that rare movie in which every choice feels thought-out and meaningful. Just like the short time these women have together, it is minimal but ideal, without an image, glance, word, or brushstroke to spare. I adored every powerfully curated minute of it.