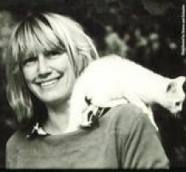 The wonderful writer Eve Babitz, whose essays about mid-century LA evoke a paradise lost that has become meta since she stopped publishing two decades ago, tells a story about the first time she tried caviar. When she realized it didn’t appeal to her, she simply put it down and decided to wait until it did. She wasn’t, she declared, about to become a person who didn’t like caviar. And when, decades later, she was offered the highest grade of Russian caviar atop a perfect silver spoon with a perfect dollop of crème fraiche, she finally became a person who did.

That’s how I feel about certain artists. There are some I’ll never dig, like the Beach Boys. (Their paradise lost doesn’t appeal to me; I blame their thin-voiced harmonies.) And then there are some who I haven’t experienced in the correct context. Yet. Whether I am wallowing in such melancholia that I can’t surrender to their joy, have not achieved the gravitas for their depth, or just really, really need that silver spoon, there are some artists whose innate value I grok but have yet to fully embrace.

Cohen and Mitchell: Muse and Muse

Certainly one of the great pleasures of being on the planet for a while is not only growing out of some passions but also growing into others. When I was a young person, Ella Fitzgerald seemed forced but by the time I’d weathered some serious sorrow, I recognized her cheer stemmed from a choice to not wallow in her own hard times—that she shone colors I’d never have recognized lest I’d made that choice myself. The rush of Beethoven seemed less ecstatic than bombastic when I played violin, but now that I am a mere listener I can ride his tidal waves as gaily as everyone else does.  It wasn’t til I dated a Bolognese man that I summoned the patience for Michelangelo Antonioni. The joyous complexity of nonvocal jazz never registered with me until I learned to shut the fuck up rather than sing along. And it wasn’t until I became a grown-up lady that my own concern with money and manners brought me to Edith Wharton’s.

So I guess I’m just waiting for my Leonard Cohen revelation. I adore his influence: Who else can claim to have inspired a trio of songs as tremendous as Joni Mitchell’s “A Case of You,” “Rainy Night House” and “That Song About the Midway?” I adore covers of his work: Like pretty much everyone else, I cry whenever I hear Jeff Buckley’s cover of “Halleluja.”  But the moment still hasn’t arrived when Cohen is the only person I want to hear. It’ll come, though. I’m a little afraid of what may happen in my life to make his singularly sweet, deceptively simple sadness essential but I feel it coming.