For years I’ve been waiting for someone to 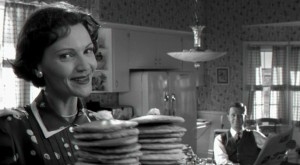 My mom, like many people who baked a lot when they were children, is the reigning queen of breakfast food. Alas, the quality of her cooking falls off as the day progresses, a fact I’ve always chalked up to her lifelong preference for sweet carbohydrates though she denies herself them. When I was a kid, she earnestly munched salad after salad while she fed the rest of us vague casseroles and overboiled vegetables. Except in the morning. Then my whole family feasted upon cinnamon challah, fried matzoh (as we half-Yids referred to matzo brei), and the world’s most wonderful pancakes: golden brown, subtly flavorful, delicate and yet sturdy enough to serve as the perfect conduits for maple syrup and butter—which is all most of us really want in a pancake. By the time I was 10, she’d showed me how to make them at least three times but I developed a very selective amnesia when it came to the recipe. Because my sister and dad were not as gaga about them, pancakes were one of the few things my mom made just for me and I was not about to let anything intrude on that experience.

So it’s not a surprise that, as an adult, although I typically adore cooking for myself and others, I’ve always quietly been hunting for an excellent pancake maker. It’s also not a surprise that I find that goal so elusive. Pancakes might seem easy enough but Proustian enterprises never are nor is anything remotely Freudian. In this as in so many other ways, childhood is sticky.

I have friends who make pancakes occasionally but in New York City we rarely eat at each other’s homes—even less frequently in the morning—unless we’re sleeping with each other. And, not to put too fine a point on it, I don’t tend to date people who cook for me, especially in the morning as I rise about two hours before most other humans do. 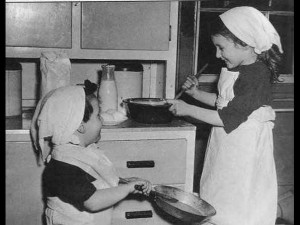 A few people have tried to don that chef’s hat for me. A friend crafted what she insisted were the perfect pancakes but they proved a little too highfalutin’ to be sullied with butter and syrup. A beau insisted Bisquick was tops but I had to lie down for most of the day after consuming his offerings. I liked the ones made by the Williamsurg restaurant Diner before they fancified their menu but resented having to put on real clothes and leave my house in order to eat them.

Then a few years ago a man I thought I loved swore he’d sort out how to make me the world’s best pancakes. I told him just good pancakes would make me deliriously happy but, morning after morning, he delivered some of the worst mistakes masquerading as food I’ve ever gummed. Cardboardy, greasy, medicinal—one batch actually tasted of blood. I tried to feign delight but my abject lies only irritated us both. Finally he grew so cross he threw my cast iron pan against the wall.  It’s safe to say the pancakes were but a mere symptom of our overall incompatibility.

A few weeks after we broke up a friend I’d not heard from since college called me up out of the blue. “This is really weird,” she said. “But I had a dream that you just broke up with a guy. He was in one room and you were in another but neither room had a door and the wall between you was impenetrable.”

I nodded without bothering to interrupt her. It’s an occupational hazard of being an intuitive that, if I’m not groking an event in my life, the universe will transmit its message to me by hell or highwater. But what she said next actually stopped me in my tracks: “The funniest thing is he just kept making the worst pancakes.”

After that I figured it was time to just mommy up and learn—or, rather, remember—how to make them myself. I tried the recipes from the normally reliable How to Cook Everything as well as from The Moosewood (or Mucaswood; author Mollie Katzen sure likes her dairy). Both produced incredibly dense, starchy cakes. Other recipes proved too runny, too rubbery, too baking-powdery.

Finally this month I put it together. It turns out a mix has been the trick all along, which just goes to show you I tend to make mashed potato mountains out of molehills. On the three occasions I’ve made them they’ve proven delicious enough that I feel confident in adding them to the bevy of online recipes that will no doubt disappoint some other finicky lady with a not-so-secret predilection for breakfast carbs.

PERFECT MAPLE SYRUP AND BUTTER CONDUITS FOR ONE HAPPY HUMAN 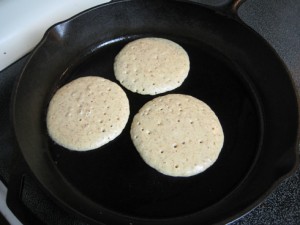 Melt the butter in a low-medium pan, and then add to a bowl containing the other ingredients, already lightly mixed together (better under- rather than overmixed). Using a measuring ¼ cup, ladle the mixture onto the pan already heated on a low-medium flame, and flip when bubbles form throughout the cake. Remove after another minute. Accept that the first batch will probably be miserable but that the second batch will be worth festooning with a ridiculous amount of butter and maple syrup. Should produce more than enough to lull you and only you into a pleasant food coma for the next few hours. Which is to say: serves one.

Eat while listening to music only you like and while reading the book that you would not be able to read if someone were prattling in your ear before you’d even had your coffee.

Essential 2012 Film Term: Sledgehelmer
An Homage to the All-Powerful Lipstick