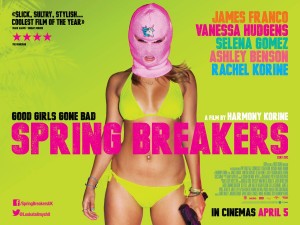 It’s that time of year. We’re living in the lull between the winter film festivals (Sundance, South By Southwest) and the spring ones (Tribeca, Cannes). Most strong films, typically released at the end of each year to ensure awards consideration, have already been malingering in theaters for months or are being reserved for Fall 2013 releases. And the blockbusters—or blockblusters, as I’m wont to call them—won’t really start wending their way down the pike until May. Which means what we’ve got on our hands is a bona-fide case of cinnenui.

The good news is that such a lull can inspire cineplexes to showcase films that resist fish-or-fowl categorization and thus are known as “tweeners,” a term as treacherous in film distribution as it is in human development. In 2011 this time of year Beginners, writer/director Mike Mill’s revelation about modern love, was released— and duly landed not only on mine but many others’ top-ten lists. And last year at this time, it was The Deep Blue Sea, a wonderfully painful paean to unrequited love that established Rachel Weisz’ chops to anyone still unconvinced. So though I’ve been moaning and groaning about how slim the cinematic pickings are, I’ve also been sure that something great was sure to come this month.

Instead, we got Spring Breakers, Harmony Korine’s first feature in four years. Despite its title, this is a poor respite for anyone’s cinennui.

Here is what it is about: four college girls—two blonde and one pink-haired and one a relatively modest brunette—who do whatever it takes (including armed robbery) to finance a trip to St. Petersburg, Florida, for spring break, where they pursue the activities that all red-blooded American girls apparently like to pursue: participate in orgies, drink and do drugs copiously, parade about in bikinis and high-topped sneakers, make love with and to guns, and murder gangbangers. Filmed in a hypnogogic sea of looping images, singsong catchphrases (“sprang break, sprang break, y’all”) and Kool-Aid colors—even the bloodshed seems curiously pastel—this vapid enterprise could go without mention except that it gleefully occurs at the expense of barely-of-age female bodies, as portrayed by girls (Vanessa Hudgens, Selena Gomez) who’ve been immersed in Hollywood franchises since before they had a chance to form a sexuality separate from their objectification.

Here is the problem with talking about this film: there is no way to critique it without being dismissed as a. unclever b. curmudgeonly c. sour grapey.

So after my friend and esteemed colleague David Edelstein went on the sacrificial lamb with his terrifically searing review, I saw no need to chime in my two cents. (He even incorporated my one clever observation on the subject: “camera as tongue.”) But while Spring Breakers is a dangerously problematic movie, one that cowers beneath the rickety awnings of “meta” and “irony” even as it benefits from the machine it purports to lampoon, what’s moved me to speak is my shock that it has been so well-received. Though it exists in the same hazy twilight as Oliver Stone’s Natural Born Killers (1994)—all soft-focus flashbacks and nekkid limbs lit up by pistolfire—Spring Breakers lacks any of the social or political urgency, even interrogation, that legitimizes Stone’s endeavors, like’em or lump’em. Which puts those of us watching SB in a funny position. Korine has achieved some level of indie cred, a fact that underscores how fundamentally reactionary the values of “indie cinema” have been ever since Tarantino made movies about big tits and guns seem edgy with Pulp Fiction. (That Korine has been referred to as an “auteur” demonstrates how mightily that term has fallen. That he refers to himself as a feminist demonstrates that feminism is as feminism does.) In turn that indie cred has allowed many viewers to embrace the film as knowingly fun commentary. All in all I call that a really glaring case of Ye Olde Have Your Cheesecake and Eat It Too, to apply Edelstein’s phrase. To wit: Let’s watch nubile young bodies fuck and suck, not to mention pump lead into a lot of black bodies, and feel clever for doing so.

But to truly do so would defy a central if lesser-known law of physics: any body, when ogled without a reciprocally appreciative gaze, will render the viewer a sleaze by the transitive property of perversion.

Art only can be deemed subversive if it dismantles the status quo rather than bolsters it. So such a film only can be excused if it proffers new insight that validates its delivery system, and this one really, really does not. Which means, bottom line, that viewing it renders us all either dirty old men or disapproving maiden aunts. Or both. I feel about this film the way I do about certain political demagogues: that to even engage with it is to already perpetuate its nastiness. Not only camera as tongue, but our gaze as tongue. A big, lewd tongue making the kind of “give it to me baby” waggle common in sex offenders on a 2 am G train. Put on them Spring Brakes (Spring Brakes), y’all.