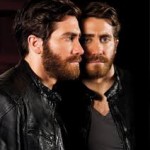 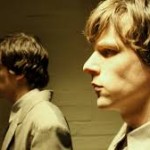 In my latest essay for Word and Film,  I focus on movie zeitgeists, in which a handful of films on the same topic come out at the same time. In particular I look at a recent double of “doubles”—Enemy (opening today), starring Two Jakes (Gyllenhaal), and The Double, starring a neurotic Jesse Eisenberg and a hustling Jesse Eisenberg. An excerpt:

Enemy, which opens this week, stars Jake Gyllenhaal as Adam, a hapless history teacher who feels threatened when he discovers Anthony, a small-time movie actor (also Gyllenhaal) who is his exact physical double. Directed by Denis Villeneuve, the film is based upon the Nobel Prize-winning author José Saramago’s Portuguese novel The Double, a cheerless affair that tackles subjects like self-illusion in what seems like one endless, stream-of-conscious paragraph. The film veers from the book in some key ways – it’s set in Toronto and boasts such surreal touches as giant spiders and an “Eyes Wide Shut”-style sex club – but is no less grim. Gyllenhaal’s acting strength typically stems from his remarkable physicality but his “two Jakes,” perhaps taking their cues from the film’s gray and brown palette, are so lifeless that not even their gorgeous blonde mates (more mirrors!) can rouse them. Some of the problem lies with the normally deft Villeneuve’s one-note direction, which eschews any soulfulness – as though it would compromise his grinding theme of the elusiveness of identity in an empty world.

Communion Waifer
Spring, and the Art of Losing