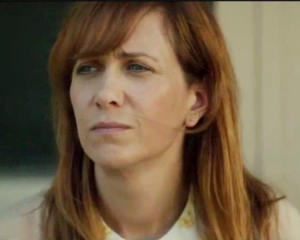 Hateship Loveship, starring Kristen Wiig, is far less blasé than the Alice Munro story on which it’s based. An excerpt from my Word and Film review :

We get the sense Munroe as narrator skims over the details of how a love match is made not out of prudery so much as a distaste for the obviousness of the whole business. “A woman not to be deterred, a man who’s lost his way? Eh, you do the math,” she seems to be saying, airily waving a rough-knuckled hand. In contrast, the film “Hateship Loveship” is a study in earnestness. To some degree this is a function of our times. The story has been updated to the contemporary Midwest from mid-20th century Canada, when stricter social codes were bound to engender subversiveness.