Fading Gigolo, John Turturro’s fifth directorial effort, is a wonderful film. It also is what my mother used to call “not everyone’s cup of tea.” About part-time florist Fioravante (Turturro) who becomes a Don Juan-for-hire to solve his financial woes, it is unfashionable in some key ways: wry rather than snarky, tender-hearted rather than glib. It takes place in the multicultural neighborhoods of old-school Brooklyn rather than in the hipster playground now earmarked as the New York City borough, and it features men and women, often in compromisingly graphic positions, who are over 40. Perhaps most unfashionably, it co-stars Woody Allen in his first artistic effort since the controversies about his personal life resurfaced, as well as in one of his first appearances in a film that he did not direct and write.

The good news is Allen’s performance is as wonderful as the film itself. He plays Murray, the owner of a failing rare book store who’s seeking new ways to support the young kids of his black, female roommate Othella (Tonya Pinkins). (The exact nature of their relationship is unclear.) When his dermatologist (Sharon Stone) says she’s looking for the right guy to join her in a ménage a troi with her friend (Sofía Vergara; what a prospect!), Murray drafts Fioravante, who initially looks stunned anyone would pay to have sex with him. (You want me to be a ho? I am not a beautiful man). Fioravante takes to the gig in high style, though, sweeping Stone off her feet with Georgia O’Keefe-like blossoms and a series of cocksure dance moves. Soon Murray is able to secure him a whole roster of, uh, clients.

Turturro may have cast himself in this role as a wink but his brown-eyed grace and rangy form prove legitimately stirring if, again, old-fashioned. His arms bear the long, ropy muscles that are developed through manual labor rather than in a gym, and he listens far more than he speaks. (There may be no sexier quality in a suitor.) We don’t know much about the circumstances leading to Fioravante’s marginal employment and shabby studio but the lack of details only deepen his character, as if he were the subject of an eighteenth-century oil painting, his richly rendered features conveying a melancholy all the more stately for its inscrutability.

It is a purity that seeps into the whole film, whose palette is also that of an oil painting: mahogany and hunter green, with bolts of golden light and the crimson of a lady’s brocade. Even Stone channels an ancient grief beneath that bravado of hers, which is photographed in the wear and tear on her face as another shade of her beauty, a contrapunto to her endless, polished legs. But the true timestopper is Avigal, a Hasidic widow who is supporting her brood of six as a lice picker and for whom Fioravante falls, though the match is doomed from the start. (There really is a Hasidic woman with this job in Midwood, Brooklyn.) Played by French actress Vanessa Paradis, concealed hair and body and all, she radiates a grave soulfulness that matches the gigolo’s, and his seduction of her entails a late lunch in which she turns the tables by teaching him, of all things, proper fish deboning techniques. The scene is less sexy than sensual, just like the film itself. What could be more old-fashioned than that?

Into this gravity bounds Woody as resident court jester Murray, marvelously timely amid all this timelessness. Roving about the city with his pack of afro-sporting kids, he is loose-limbed and jaunty, more comfortable in his skin than he’s been in half a century. This is not the Woody Allen perched in palatial uptown apartments, mooning over WASP beauties and imagined ailments, but the Woody Allen who excelled at street ball while growing up in, yes, Brooklyn. The waggish hustler with generous ways who talked his way into comedy writing jobs before he was seventeen. As Murray, Allen sets up deal after deal for Fioravante while squiring his charges to appointments and wrangling with the “Shomrim,” the Orthodox Jewish watchmen who work with the NYPD. (Liev Schreiber plays their leader with a deliciously straight face.) Because Allen is veering from his standard shtick – because he is, in fact, acting – we feel licensed to experience him as Murray rather than as the alleged sex offender who some of his family members claim him to be. While nothing could be more unfashionable than focusing on the art rather than the artist, doing so is perfectly in keeping with Turturro’s anachronistic sensibilities. And make no mistake: This is Turturro’s world. Woody is just playing in it. 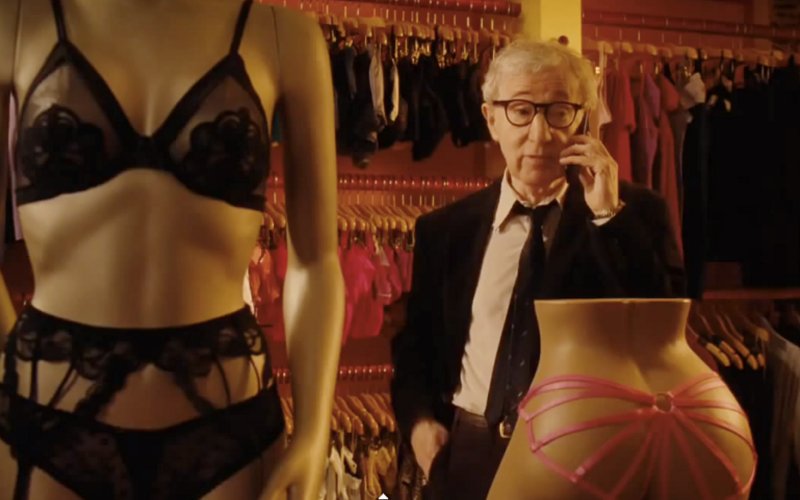 This world is defined by the fleeting nature of romantic love, the disappointments of a middle age that occurs when the heart rather than the body fails us. Since Woody as Murray is its beating center – a man who overflows with love for everyone as well as for any mischief he can manage – he is forever young here. In this film at least, he is also forever ours.