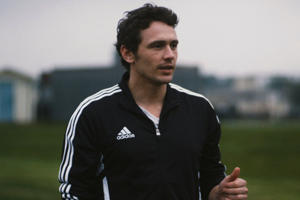 The following is a review I originally published in Word and Film.

Much has been made of James Franco’s unfortunate Instagram flirtation with an underage Scottish girl last month, especially as it dovetails with the release of “Palo Alto,” in which he plays a high school soccer coach who has a sexual relationship with a student. Was his transgression a publicity stunt for the film, one of his bizarre meta-performance art pieces, or the flailing of another predatory adult male who’s failed to grasp that privacy is, like, so last millennium?

No matter what the actor/PhD candidate/writer/director/artist/Seth Rogen aficionado’s intentions, it’s hard not to flash on Instagram-Gate when first settling in to watch Gia Coppola’s film about the dissolute adolescents in a California suburb. In one of its first images, we’re introduced to Franco as “Mr. B,” a figure looming against a soccer field backdrop. Here, his sparkly eyes are a little dimmer; his once-lithe build a little bulkier; his overall visage a lot more dissipated. In short, he resembles the kind of fellow keen to recapture his glory days at whatever cost necessary.

It’s also hard not to flash on Franco as Daniel Desario from “Freaks and Geeks.” Not since Matthew Broderick, who played that iconic delinquent Ferris Bueller, appeared as a hapless civics teacher in “Election” has an actor’s transition from student to teacher roles so succinctly signaled the passage of a generation.

In general, “Palo Alto” is all about the passing of torches. First-time director Coppola bears quite the pedigree: Her great-grandfather is film composer Carmine Coppola; her grandfather is director Francis Ford Coppola; her aunt is director Sofia Coppola; her cousins include actors Nicolas Cage and Jason Schwartzman; and she most resembles her great-aunt, actress Talia Shire. Gia’s film features Julia Roberts’ niece and Eric Roberts’s daughter Emma Roberts as April, the soccer player involved with Mr B; the son of Polly Draper from “Thirtysomething,” Nat Wolff, is Fred, a whirling dervish of destructive testosterone; and Val Kilmer’s son Jack Kilmer is Teddy, an artist calamitously influenced by his best friend Fred. (Val also appears in this film as April’s ponytail-sporting father, who so aggressively proofs her papers that she’s accused of plagiarism.) To Coppola’s credit (for the sake of clarification, “Coppola” will refer to Gia for the duration of this review), for her first directorial effort she tackles the queasiness of legacies head-on, and without the pretty, “poor-little-rich-girl” torpor that is her aunt’s trademark.

In an early series of loosely connected school, party, and car scenes, April, Fred, and Teddy crash into each other and their own desires – literally and figuratively. “Blur” is the name of the game here: blurs of booze and smoke (even the adults are perennially stoned). Blurs of bleached-out color on sunny days. Blurs of neon lights blazing up night skies. Slowly, a tale of sex, drugs, and electronic music (rather than rock and roll) emerges from the chaos: Fred’s rage is spinning out of control, and its origins are crystallized when his stepdad (Chris Messina) makes a pass at Teddy, whose struggles to assert himself are so ineffectual that he can’t bring himself to ask out April despite a reciprocated crush. And then there’s Mr. B, who peels off April’s soccer uniform with the temerity of a man destined to avoid women his own age.

If all this still feels aimless, it is Dickensian compared to the affectless sketches that comprise Franco’s eponymously titled short story collection, upon which this film is based. (Coppola wrote the screen adaptation.) Franco’s 2010 book recalls Bret Easton Ellis’ Less Than Zero; both are written in a simple, declarative style that suggests a profundity that is never realized. If anything, both books convey the emptiness of a world unpeopled by role models – an emptiness that Coppola illustrates admirably, with a narrative thread she’s forced to fabricate herself.

Even when the adults in “Palo Alto” do not approach young people as sexual prey, they approach them as emotional prey or, at best, as equals in social equations in which no one has grown up. April’s mother is absently accepting, acutely needy; Teddy’s is sad and helpless. The fathers, narcissists and pedophiles for the most part, come off far worse. (Fred does not even seem to have a mother.) Into this void the young actors – particularly live-wire Nat Wolff – step with aplomb, and cinematographer Autumn Durald ably captures their surges of misery, ire, and elation with her Steadicam. (No shaky lenswork here, thank goodness.) Only Roberts is miscast. At twenty-two (six years older than her character), she’s too old, too poised, too Hollywood to bristle with the hyperkinetic, boneless agita of the other teens in this world. Her stab at disaffection seems oddly Disney.

The casting of Franco, on the other hand, works well. As the saying goes, as a writer he is a great actor. In the haze induced by his Insta-crammed resume, though, we can be excused for forgetting that as an actor, Franco is a great actor, too. Here he paints a whole prototype in small details: an extra beat in a mid-sentence pause, the awkward duck of his head during a kiss.

The real headline is Coppola herself, though. I may not love “Palo Alto” – its too-familiar themes have been enacted more powerfully by the likes of Larry Clarke and Gus Van Sant – but its substance and style are singular enough that I am keen to see what she does next. Such a fine debut reinforces the reality that the Coppola dynasty is not a study in nepotism so much as an artisanal family business – one in which clan members master a craft that has been lovingly passed down through the generations. For the Coppolas, it’s the movie business; for another large Italian family, it might be the olive oil or pasta business. Come to think of it, I can’t wait to try the wine Gia inevitably will make as well.

Of Heels and Men (Or: Heels and Heels)
Why ‘Hannibal’ Is an Acquired Taste