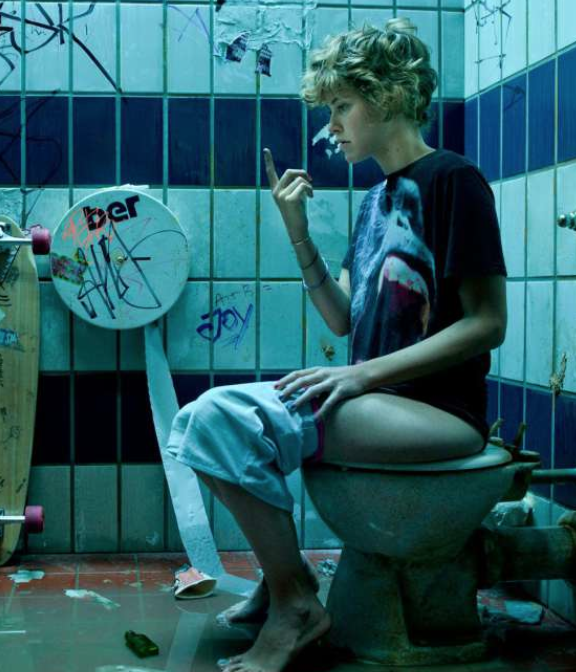 Every once in a while, a film comes down the pike that elicits such a strong visceral reaction that at first it’s hard to determine whether it’s any good. I’m not talking about those slash-and-gash horror films that have become as ubiquitous (and arguably as American) as apple pie. I’m talking about the likes of “Blue Velvet” – films that dive into the darkest corners of the human psyche, and emerge with artfully embroidered insights about the intersection of sexuality, violence, and neuroses. I’m talking about “Wetlands,” the adaptation of the eponymous, best-selling German novel.

The book was enough of a shock, especially since it’s authored by well-known European TV presenter Charlotte Roche. Written solely from the perspective of eighteen-year-old Helen as she malingers in the proctological ward of a hospital, it is a reverie of bodily fluids and sexual and drug misadventures. It is also the first book I have ever encountered that I could not read while eating. The film, directed and adapted for the screen by David Wnendt, is both more and less disquieting: Like the book, it is rooted in Helen’s hospital room but it, uh, fleshes out her musings with powerful imagery (some of which is impossible to erase from the mind’s eye), a waggish wit, and supporting characters like Corinna (Marlen Kruse), her malleable best friend.

Make no mistake, though: This story is entirely Helen’s, and there has never been a character like her in the history of film or literature. Raised by the kind of mother whose worst fear is being caught with dirty underwear, Helen (Carla Juri) rebels by languishing – drowning, even – in the sea of her own body: tasting, sniffing, prodding, and generally relishing her various secretions, excretions, odors, and sexual organs (which comprise a larger category for her than it might for others). As she says, “I turned myself into a living hygiene experiment.”

The film is shot in a series of hypnogogic close-ups and poker-faced, lickety-split tableaus and flashbacks reminiscent of Danny Boyle’s “Trainspotting.” Accordingly, it begins with a pair of dirty bare feet riding a skateboard while Helen, in a voiceover delivered in the cadence of a kindergarten teacher, details her lifelong struggle with hemorrhoids. As she describes the zinc cream that eases her itching and swelling, the feet splash through an inch of septic water and plant in front of the world’s grossest toilet captured on film since, yep, Ewan McGregor’s own star turn in a barroom loo. The camera then zooms in on … Helen’s face, emerging from her own derriere.

We get it; how could we not? Here is a film about a girl with her head stuck up her own ass.

Soon enough, Helen, whose older lover has instructed her to shave her whole body, has an accident that causes an anal fissure, and she finds herself curled up on a hospital bed while five male doctors examine what she refers to as “her peach.” A naked, exposed young girl ogled by clothed, older men is a complicated trope, and the fact that she subverts it by coquettishly turning the table on her examiners only complicates it further. It’s the question lurking in every frame here: Does this film fetishize, even sexually objectify, this young girl’s fetishization of her own body? Or does it righteously expose a cultural squeamishness about the female body and its various productions and urges? Luckily, there are less strident questions also lurking here, and they may be the most universal ones at hand: Why is Miss Helen so orgiastically self-obsessed? Why do some, if not all, of us obsess over own bodily functions? And why are we so simultaneously afraid of discussing such basic aspects of daily life? 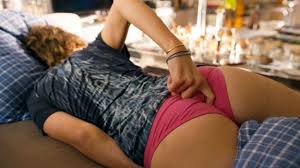 To this end, the narrative wanders through the horror of Helen’s parents’ self-obsessions – a wealthy father who likes to bed young girls and who humiliates his wife at a dinner party by likening the carving of a turkey to her episiotomy; a jealous mother who cuts Helen’s long lashes and who deliberately drops her in a trust fall to teach her “to trust no one.” Even in this thicket of vomit, fecal matter, and blood, one of the most haunting visuals is the mark of a white handprint outlined and surrounded by young Helen’s sunburn; her father could not be bothered to spread the suntan lotion he slapped upon her back.

Her parents, now divorced, are not only negligent. They are invested in her disembodiment if it will allow them to maintain appearances and their own positive self-esteem. They rely upon her to gloss over her mother’s attempt to kill herself and Helen’s younger brother, for example, which results in her checking out from reality in other ways. By losing herself in the maze of her own body, she is both defying and deferring to her family ethos: On one level, she is trying to assess what is true; on another, she is dissociating from anything larger than (here it is again) her own asshole.

I’m not sure if any young American actor working right now would be up to the challenge of portraying the profoundly complex Helen. The German Juri is. With her jutting jaw, mop of unruly curls, and thick fringe of lashes, she resembles the love child of Ally Sheedy and Greta Gerwig in one moment, a wretched matron in the next, the Angel Gabriel in the third. Even when swapping used tampons with Corinna or consuming undigested drugs excavated from her own vomit, she radiates a fierce calm that allows us to remain sympathetic to her self-exploration as well as her self-mutilation. She is uncanny, really, and the camera loses itself in her rough-hewn physicality and watchful gaze as much as Helen loses herself in her auto-neurotica. (That we never glimpse her actual sexual organs helps keep Helen a subject rather than an object.) 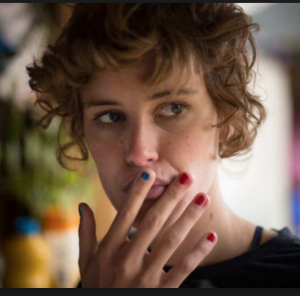 At one point, Helen backtalks her doctors. (Bad puns are inevitable in this review, apparently.) I’ll be naked during my operation? They’ll talk about my body; I’ll register it for years in my unconscious! It’s a brilliant distillation not only of the mysterious workings of human sexuality – the place where we wrangle with nearly every experience we cannot otherwise confront – but a description of this searing film’s credo: We all want to control what we can’t control. In a culture that still can’t tolerate gyno-power, that desire triggers our dreams, and nightmares, of the female body.