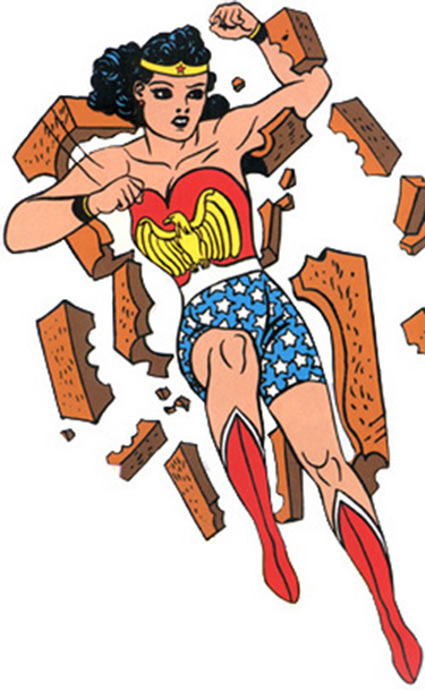 Mark Twain once said, “History doesn’t repeat itself but it does rhyme.” Certainly that’s true when it comes to feminism. Women began the twentieth century fighting for the right to vote as well as for legal, affordable contraception. Although they achieved their goals, 100 years later voting is once again a problematic issue and the “right to choose” becomes more tenuous by the day.

Part of the problem is women today take their liberties for granted because they don’t realize how recently they were acquired. “Herstory” isn’t remembered well, even by many activists. And when that’s the case, we’re not just doomed to rhyme; we’re doomed to lose momentum.

In her new book, The Secret History of Wonder Women, Jill Lepore reminds us of the suffragists and feminist utopists of the early twentieth century who helped birth the most popular female superhero of all time. Although the raven-haired Amazon didn’t debut in a comic book until 1941 (just as the United States entered World War II), Lepore details how she harkens back to the first wave of feminism.

Wonder Woman was based partly on Olive Byrne, a double wrist cuff-wearing writer who was not only the niece of birth control pioneer Margaret Sanger but also the “other wife” of the strip’s creator, William Moulton Marston – a lawyer, psychologist, screenwriter, women’s liberationist, inventor of the “lie detection” test, and, as Lepore reports in satisfying detail, a secret polygamist.

Byrne was the neglected daughter of Ethel, a birth control activist who was steamrolled by her more famous sister Margaret for being too radical. While Olive was still in her teens, she met psychology professor Marston, who was already married to his childhood sweetheart, Sadie Elizabeth Holloway, a brass-tacks pragmatist with degrees in law and psychology. Byrne, Holloway, and Marston began living in a complicated polyamorous arrangement in which Marston pursued his dreams, Holloway supported them financially, and Byrne reared her own children as well as Holloway’s. Although Marston was father to all four children in their household, Byrne’s children were raised to believe their father had died before they were old enough to remember him. What’s more, evidence suggests that the three were members of a new-age sex cult and that Byrne was usually introduced to outsiders as the family housekeeper. Whether Byrne and Holloway also enjoyed a sexual relationship with each other is not something Lepore ever states explicitly, although, after Marston’s death, the two women continued to live together as avowed “life companions.”

What Lepore does state explicitly is Marston’s hucksterism. Full of get-rich schemes and go-get-’em mottos, the comic book creator managed to ruin a few businesses and get sued for fraud before he began writing Wonder Woman.” But he was also known for his declarations about women’s rights. As early as 1937, he announced in a press conference that “a matriarchy was inevitable.” (Why not? By then he’d been thriving in a kind of matriarchy for years.)

For the six years he wrote Wonder Woman comics (Martston died in 1947), she served as a female role model who advised other women to pursue education, fulfilling careers, and personal power, and who raged against the chains of “domestic slavery” as she extolled values of love and kindness. Her exclamations (Suffering Sappho! Great Jumpin’ Hera!), her weapons, and her “athletic rather than Hollywood” legs referenced the feminists of Marston’s youth. He even included a four-page “Wonder Women of History” spread in each comic that highlighted such female trailblazers as Clara Barton.

A male hero, at best, lacks the qualities of maternal love and tenderness … It’s sissified, according to the rules, to be tender, loving, affectionate. ‘Aw, that’s girl’s stuff!’ snorts our young comics reader. Not even girls want to be girls so long as our feminine archetype lacks force, strength, power …. The obvious remedy is to create a feminine character with all the strength of Superman. 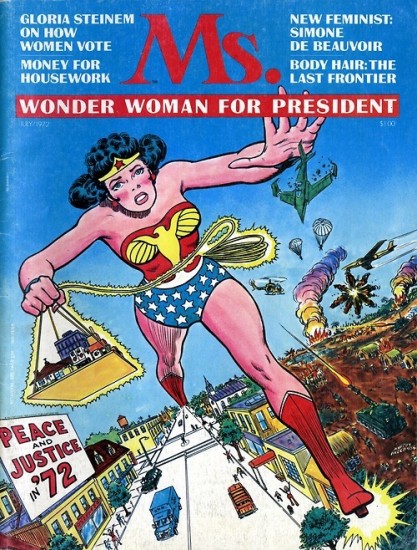 Especially after the end of World War II, the concept of autonomous, powerful femininity proved culturally divisive. (It still does.) As their popularity bloomed, naysayers accused Wonder Woman comics of deviance; after Marston succumbed to polio complications, no one could protect the strips’ integrity. In the 1950s, the female superhero’s fierce independence was replaced by a hunger to marry her beau, Steve; in the 1960s, her magical powers and utopian agenda were reduced to normal martial arts fighting skills. By the time Gloria Steinem made her a 1972 Ms. Magazine covergirl, Wonder Woman’s roots in feminism’s first wave had been largely forgotten. It took a by-then eighty-something Holloway to remind the second-wavers that Wonder Woman had been a “Ms.” when they were still twinkles in their mothers’ eyes.

A long-awaited “Wonder Woman” movie is already under way. There’s even a distinct possibility that a woman will direct it. But imagine another film that entwines three plots – the trajectory of feminism through the last 100 years; the madcap Marston “matriarchy”; and tales of Wonder Woman herself – in a loose adaptation of Lepore’s book. Like the extraordinary Harvey Pekar biopic “American Splendor,” “The Secret History of Wonder Woman” could feature an animated Wonder Woman (the whole point of a superhero being that she, like a utopia, doesn’t really exist) intersected with documentary footage of the real-life feminist history that enkindled her. Actors could be cast to portray the romantic “triple” storyline: With his oily charisma, Danny Huston would be an amazing Marston – his hulking physique even resembles Marston’s former football player bulk. Olive, who is described as both tomboyish and nurturing, could be played by Ellen Page, who was a gender rights advocate long before she came out last summer. As for Holloway, I see Holly Hunter, who’s specialized in self-possessed, pugnacious women ever since 1987’s “Broadcast News.” 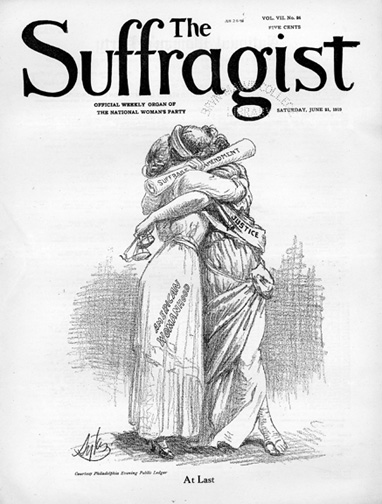 More important than this potential movie, though, is that the history of Wonder Women – and feminism itself – be restored to mainstream awareness. Lepore writes, “Feminism made Wonder Woman. And then Wonder Woman remade feminism, which hasn’t been altogether good for feminism. Superheroes, who are better than everyone else, are excellent at clobbering people; they’re lousy at fighting for equality.” By embracing Wonder Woman’s complicated roots, perhaps we also can embrace the idea that feminism is made possible by everyday, flawed women and men. Looking back is essential to keeping our eyes on the prize.

Peters Never Grow Up
The Autumn of Our Disconnect