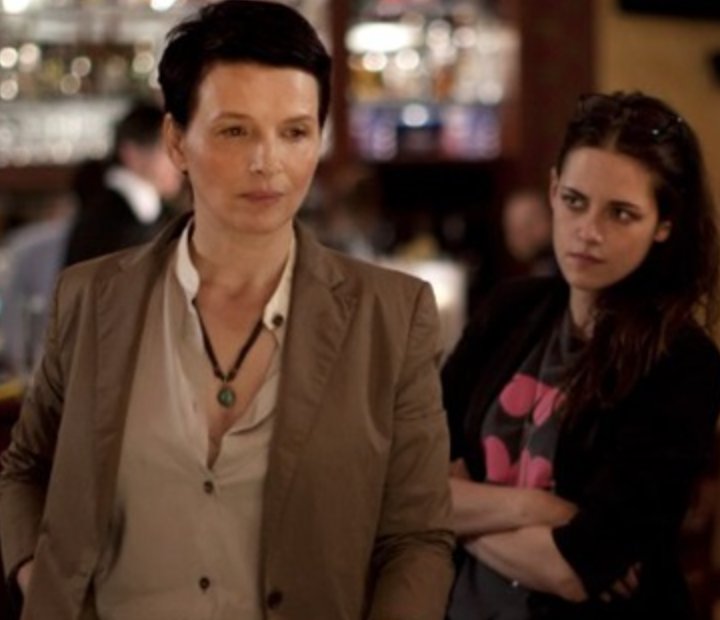 Olivier Assayas may be one of the finest directors on either side of the Pond but his work, as subtle as it is strong, has rarely inspired superlatives. This may change with his newest, “Clouds of Sils Maria.” It’s hard to imagine a swoonier, smarter meditation on the intersection of gender, age, power, and the performance arts – especially one that passes the Bechdel Test with such flying colors. Here lies a film so deftly soulful that it revives the most tired of cinematic genres: the metamovie.

Internationally acclaimed movie star Juliette Binoche plays internationally acclaimed movie star Maria Enders, whose most intimate – if one-sided – relationship is with her personal assistant, Val (Kristen Stewart, who’s presumably had an assistant or two in her time). Enders has been asked to appear in a new staging of the (fictional) play “Maloja Snake” as a suicidal, middle-aged businesswoman romantically manipulated by a ruthless twenty-something female assistant. The problem: She still identifies with the younger character, whom she portrayed in a film adaptation of the same story – and which launched her career two decades before. Add in the fact that the actress who originally portrayed the older woman died soon after the play closed, and Maria is genuinely spooked, especially after the playwright, Wilhelm (loosely based on German director Rainer Werner Fassbinder), dies on the night she’s to accept an award on his behalf. Lest all this not be meta enough, Assayas co-wrote Binoche’s first starring role in Andre Techine’s “Rendez-vous” (1985), about an up-and-coming actress, and created “Clouds of Sils Maria” when she challenged him, after appearing in his real-estate drama “Summer Hours” (2008), to write a part that better encapsulated the female experience.

This all sounds dizzying because it is – but rhapsodically, like a dream that’s so pleasurable we scarcely mind the insights with which it bombards us. Naturally, Enders signs on to the play (it’s too savvy a publicity move to bypass) and in a long middle stretch, she and Val hightail it to the Alps where, theoretically, they can run her lines in peace. I say theoretically because Enders never stops fretting. She questions her decision to take the role, questions the role itself, and questions Val’s artistic judgment when it veers, as it often does, from her own. In turn, Val labors, increasingly unsuccessfully, to establish a dynamic with Maria that is more mutually respectful than obsequious. “You can’t be as accomplished as you are and as well-rounded as an actress and still expect to hold on to the privileges of youth,” she tells her unamused employer, although it takes us a minute to realize she’s saying this as Val rather than as the play’s femme fatale. A glorious confusion prevails about which disputes are part of the text and which are taking place between Maria and Val, who’s often between a rock and a hard place with her boss. Assayas has always had a unique (not necessarily admirable) ability to render the one percent’s struggles sympathetic. His new grasp of the inherently fucked position of the “assistant” seem to come part and parcel with his improved gender politics: power theory at its most useful, perhaps. 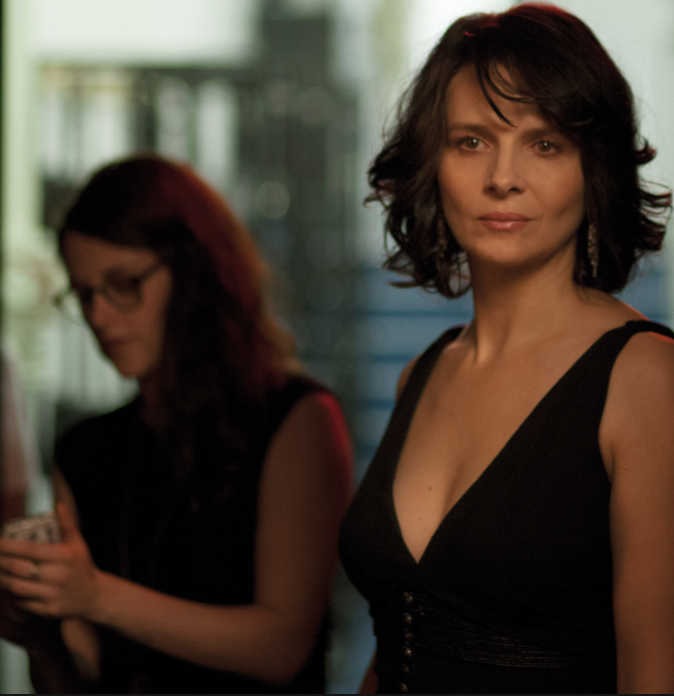 It’s easy to invoke an “All About Eve” reference here but the comparison doesn’t really hold water. Assayas, Binoche, and Stewart are burrowing into something less pat than mere female competition, and they keep hitting their marks. For one thing, Maria and Val are held hostage by their fears rather than each other: Maria is afraid of becoming less desirable, less relevant – less seen, really – and Val is afraid she’ll never be seen at all. Compellingly, the film echoes the younger woman’s anxieties. We never learn her backstory, never glimpse the photographer whom she claims to be dating. Only in one scene do we even encounter Val outside Maria’s web – on a foggy mountain road, where she slumps sickly and mutely next to a parked car. The circumstances are never entirely explained. Instead, we sit in Maria’s anguish as she tinkers with her self-perception – or, rather, as her self-perception morphs despite herself.

By the time Maria’s eclipsed by mega-star Jo-Ann (Chloe Grace Moretz), the crazy-like-a-fox hot mess playing the femme fatale character in the new production, the older woman doesn’t even bother introducing Val to her costar. It’s an emotional pyramid scheme underscored by a subplot with Maria’s caddish colleague of long ago: She claims to hate the older man but doesn’t pull away when he paws at her during an event, as if there’s something seductively voluptuous about being the young one again for a spell. And I do mean spell. A pervasive headiness seeps into every shot, with tension consistently simmering below the surface but never boiling into anything so unseemly as an actual standoff. The most serious drama takes place offscreen via sudden omissions that send us, thrillingly, over cliffs. This is high-altitude filmmaking on every level, marked by a sleepy, glamorous attention to visual and narrative detail that’s in keeping with the rarified mountain air.

Consider the physical presentation of both women. At the beginning, Maria is all décolletage, doe eyes, dark curls. As she digs into the older character, she clips her hair and dons severely cut men’s suits even when not onstage; by the film’s end, her eyes and lips have narrowed to mere slits. In contrast, a bespectacled Val is always tomboyish, quietly alert to the point of hypervigilance. She’s watchful, not watched. There’s an unspoken equation being drawn between being seen, being female, being young, being desired, being objectified, and being powerful – bottom as top, as it were – and Stewart and Binoche explore it ably. 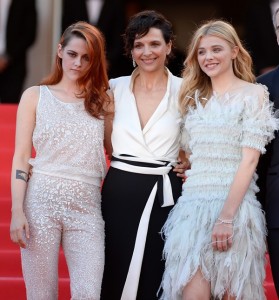 Stewart in particular has never seemed more comfortable in her own skin, ironically by luxuriating in her perpetual, palpable self-consciousness. (She’s never looked more appealingly mousy.)

Like the dream it very well may be, “Clouds of Sils Maria” is oddly but not offputtingly paced. Its climax arrives sooner than we’d expect, with an extended denouement that functions as a whole other story, complete with an elegant apex that draws us in anew. Though it’s a respectable two hours, I was disappointed when this film quietly shuddered to a stop. I could have floated on it forever.

Notes from the Soggy Underground
She, Robot: ‘Ex Machina’