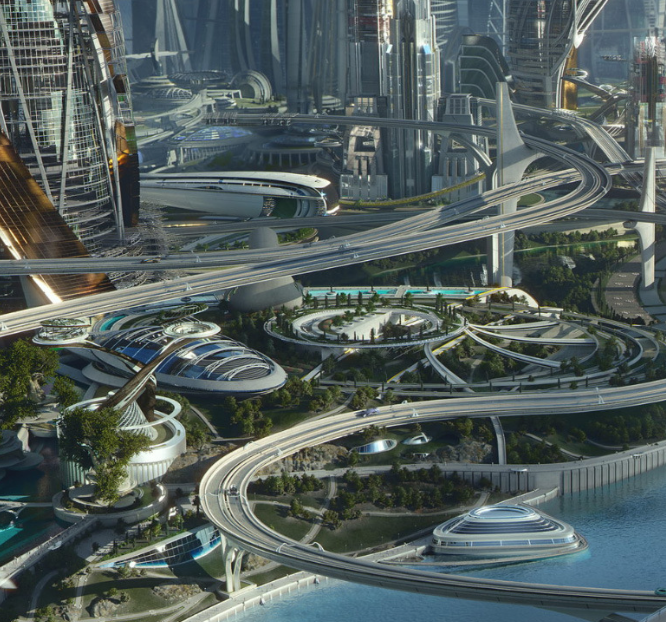 “Tomorrowland” may be the first Disney film that’s difficult to encapsulate. I didn’t understand its premise until thirty minutes in, and I’m still not sure I totally get it. The irony is that it boasts the best trailer I’ve seen in years: As George Clooney rasps, “What if there’s a secret place where nothing is impossible?” a girl in a gray, industrial room picks up a button, instantly transports into a golden world of shimmering wheat fields and spiraling glass buildings, and then transports back without the slightest explanation. But while I wish all this intrigue led somewhere fantastic, as Gertrude Stein was wont to say, “There’s no there.”

In this era in which doom and gloom rule the box office, applause is still in order for the very existence of a utopian film – which, make no mistake, “Tomorrowland” is. It opens as scientist Frank Walker (Clooney) argues with an off-screen Casey (the girl in the trailer, played by Britt Robertson). “This is a story about the future, and the future can be scary,” he is intoning when she suggests he try a more upbeat approach. Cut to Frank as a kid (Thomas Robertson, whose resemblance to a young Clooney is uncanny) at 1964’s New York World’s Fair, where he is trying to make his fuel-powered jetpack work. Though he doesn’t pull that off, Athena, a freckle-faced, bright-eyed girl his age, slips him a pin that briefly sends him to that mysterious world of glass, wheat, and apparently gluten-tolerant denizens. It’s a glimpse that Frank, now a curmudgeonly hermit who is “100 percent positive” the world is ending within months, claims destroyed his life since it gave him false hope. Imagine a “Wizard of Oz” in which Dorothy is unceremoniously shuttled back to Kansas within the first five minutes, and you see where he’s coming from. 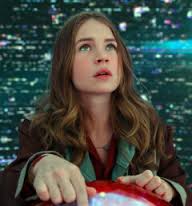 A teen science whiz clad in a hoodie, baseball cap and perfectly waved hair – dude, this is Disney – Casey is the daughter of a NASA engineer (Tim McGraw, if you can believe them apples) whose latest job is to dismantle the shuttle launch platform. She views it as her job to dismantle that dismantling, which lands her in jail. There, she is mysteriously slipped another one of those pins that hurtles her to Tomorrowland. Upon returning, she is not only introduced to Frank but also to Athena (Raffey Cassidy), the adorable 1960s girl who, as it turns out, is actually an adorable android ambassador of Tomorrowland. According to Athena, the world is about to end, and it’s the responsibility of these three to save humanity by introducing the masses to that other world, which has been kept a big secret since its powers-that-be (namely, an eyebrow-waggling Hugh Laurie) don’t trust that said humanity won’t ruin it.

So does Tomorrowland even exist? That’s where I’m still confused. It’s less of a real destination than a possible destination, which is the very definition of a utopia (“no place and perfect place”). Basically, Tomorrowland is a technologically jacked utopia-incubation tank that you can access by splitting open the Eiffel Tower and accessing an old-fashioned spaceship. That last bit is quite cool, and there are many other nifty effects, including one in which divers slip vertically from pool to pool in a kind of aquatic elevator.

I shouldn’t be surprised, as this film is crafted by big dreamers: George Clooney may be the last Hollywood star who believes in movies’ power to implement positive social change, and, for all the dystopian fare director Brad Bird has generated with cowriter Damon Lindelof, he’s a half-full-glass guy at heart. Just rewatch his “The Incredibles” and the future-ain’t-all-bad “The Iron Giant.” Also nifty: the unapologetic female badassery of characters Athena and Casey (though Robertson is woefully generic), as well as the lack of sexual chemistry between Casey and Frank. (Sounds crazy, but in real life Robertson is roughly the age of some of Clooney’s recent girlfriends.) It is weird that grown-up Frank still acts like the spurned suitor of child robot Athena. Then again, this whole movie is weird since it’s grounded on a fascinating if convoluted concept: that the past’s future is better than the future of today, which technically is the past’s future, which still could be improved if we just believe it could be improved. 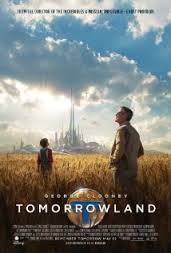 It might be easier to swallow this campaign against dystopias if it weren’t emanating from hyper-corporate Disney. After all, “Tomorrowland” is an amusement park ride adaptation, which is possibly the queasiest film genre of all time – and not just literally. Because this message of optimism comes wrapped in the exceptionalism lurking in all of Bird’s films, it’s unclear to whom it’s really targeted, anyway. This film is too complex to be kids’ fodder, too saccharine-on-steroids to land with most adults, and too unconvinced of human potential to effectively spur most people to action. I guess it’s a small world, after all.