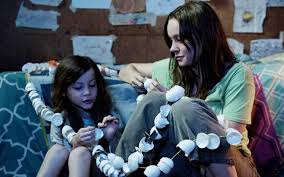 To write about “Room,” the much-heralded adaptation of Emma Donoghue’s Man Booker Prize-nominated 2010 novel (she also penned the screenplay), is to write yourself into “Room” with nary a trap door in sight. This is not to say that the film is a black hole, though the effort to avoid spoilers is overwhelming. It’s that this story occupies a sort of fairy tale back room, where we forever are held hostage by the terror of Alice falling down the hole or of Rapunzel trapped in her tower room.

The analogy of Rapunzel is more than apt, actually. “Room” is set in a 11-by-11-foot sealed, sound-proof garden shed called (of course) “Room,” in which a woman known only as Ma (Brie Larson) and her five-year-old son Jack (Jacob Tremblay) are confined. At first, we know very little. We don’t even know that Jack is a boy since he has long, long brown hair just like Ma. The two wake in the same bed, do their exercises, eat breakfast, and then pour over books together. Jack is fond of life in Room. We are introduced to his friends “lamp,” “blobby spoon,” and “rug,” and he and Ma stick to a routine in which they limit TV-watching time, take vitamins, and practice strict body and oral hygiene. But slowly we begin to grok the impossibility of their existence, especially when we realize Jack is still being breast-fed and visits “Wardrobe” every evening while an unseen man named Old Nick deactivates an alarm to enter Room and make a series of animal-like grunts. Slowly, the full horror of this situation dawns upon us: These two are prisoners, and Ma is being daily raped. 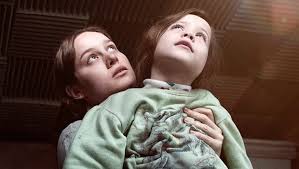 Donoghue’s book, loosely based on the Fritzl Case of 2008, is told entirely in Jack’s voice, which offers extraordinary insight into what we take for granted about intimacy and personal individuation; Jack was born in Room and can’t imagine anything else. Some of that fertile claustrophobia is lost on screen as Donague wisely shifts the perspective to that of a third-party observer. (A film-length kid voice-over would have been ghastly.) But Irish director Lenny Abrahamson, who clearly has a penchant for confining actors to tight spaces (Michael Fassbender spent all of “Frank,” Abrahamson’s last effort, wearing a large fake head), compensates by choosing a wide-screen lens that captures the coziness Jack feels as well as the monotonous despair plaguing Ma. The composition is stunning.

Anyone unfamiliar with the plot is advised to stop reading here until after they’ve seen the film.

“Room” is structured in two acts, split by a mini-thriller in which Jack escapes and engineers a rescue for Ma. Their reunion comprises one of the best minutes in 2015 cinema. Afterward, the two are brought to a hospital, where Jack’s first exposure to its overlit white walls is like something out of science fiction (even more haunting since he’s been raised to think of everything outside of Room as “outerspace”). 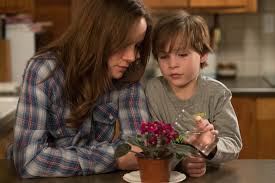 An establishing shot of Ma’s home suburb powerfully conveys Jack’s fear of wide-open spaces and people other than his mom. From here, the two experience individuation profoundly differently. Jack longs for Room’s protection and the unadulterated bond he shared with his mother while there; Ma, who has held it together for Jack since she gave birth to him in captivity, finally falls apart, especially after she agrees to an intrusive TV interview for much-needed cash. Nineteen when she was captured, it’s as if she suddenly woke up from the world’s worst dream and found herself a mother without ever having been granted an adulthood.

The strength of this film hinges on Larson and Tremblay’s performances, and neither disappoint. A remarkably intuitive child actor, the latter excels at indicating Jack’s ever-shifting interior landscape without resorting to mugging for the camera. Feral and nurturing, mother lion Larson delivers on the promise of her brilliant performance as a counselor for troubled teens in “Short Term 12” (2013). Her desperate calm supplies the true heart of this film. 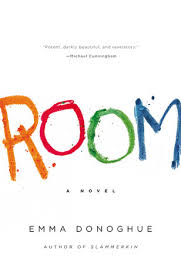 In the book, Donoghue includes a passage in which Jack stumbles upon a TV show featuring commentators debating his cultural significance. Though it would have read as heavy-handed on screen (Donague does an admirable job of “killing her babies”), the scene brings home a salient point: This story is best experienced as allegory–perhaps the allegory of an era in which we are rapidly recalibrating our understanding of space and self-reliance. I was haunted by “Room,” and suspect others will be as well. Like all the best fables, its meanings will continue to emerge for years to come. For now, it most effectively suggests how our attachments–to objects, to each other, even to our understanding of ourselves—both impair and secure our spiritual freedom.

‘Beasts of No Nation,’ Fable for All
What Is Fixed Is Also Finite