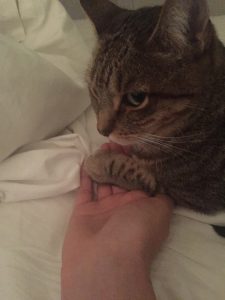 As I type this, Grace is sitting on my legs and purring loudly enough that I can not only hear it but feel it. This is momentous because I spent the entire day looking for her while I was supposed to be packing for New York. She disappeared this morning and, because I’d left the front door open while moving things back and forth from my car, I began to fear that she was gone forever. If she had fled into the environs surrounding this Truro house, chances were high that she would be lost or severely injured. All kinds of animals live in these woods–coyotes included—and she’s never spent any time outside since we rescued her on the streets of Brooklyn when she was three weeks old. She was by herself, eating trash and hiding behind a stoop. The size of my palm, she was so little that she normally would not yet have been weaned. I believe that this is why she remains a permakitten. Like me, she was never safe as a child.

At first I assumed my little one had just found a new hiding place. But after after a few hours, I started to get nervous. I turned off all the electronics in the house and sang “Love You Madly,” the Ella and Duke song to which she has come running since she first became my charge eight years go. But she didn’t come. I turned the house upside down and still didn’t find her. And then I started to imagine the upheaval had so upset her that she’d run outside and had gotten lost. Maybe eaten.

I called Katie crying and she talked it through. An animal parent herself, she both understood the depth of my worry and the need to assuage my fears. My anxiety was making it impossible to think clearly, and probably was keeping G. hidden if she were somewhere in the house.

But if something had happened to her, there was no one around who could help. (Katie was in New Jersey.) For the first time in a long time, I really felt the precariousness of my situation.

“I doubt she’d leave the house,” K. said. “You’ve told me she’s afraid of the outdoors.” I nodded. I was crying too much to talk. “It’s hard to see it because you’re panicking—so understandably—but chances are really really good she has just hid incredibly well.”

I nodded again and got off the phone. And then I really started bawling. How could I get in a car without my Grace? What if I didn’t find her before night fell? Would she be lost in the woods forever? What if she was stuck and sick somewhere?

My brain kept going. What was I returning to in New York? There was no job waiting for me there. No forest, no oceans. No significant other. For all I knew, my apartment had been ransacked in my absence.

I didn’t want to go back before but now, with Grace missing, it wasn’t possible. I could never leave while she was lost in Massachusetts.

I flung myself on the bed and sobbed harder. And then a mew emerged from one of the pillows. I picked it up 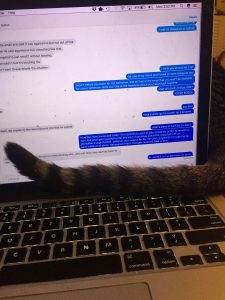 —heavy, so heavy—and realized Little Miss had managed to tear a hole through which she’d burrowed. I ripped it further and her tiny face stared back at me, as bereft as I felt.

I would have been furious—usually she comes when I call no matter how obstinate she’s feeling—but in her eyes I saw the grief I’d been holding at bay for days. I pulled her out and hugged her. And gave her fish. And catnip. And agreed we’d leave tomorrow and take it easy tonight.

As ever, Gracie is my overfamiliar. She feels every fear and sorrow I carry, mirrors what I will not confront. Sweet and sensitive, she is my outside heart.

In the picture at left, Amazing Grace’s tail is sneaking around the computer screen as I type to you. All this will come with me. I pray it will shore me true.