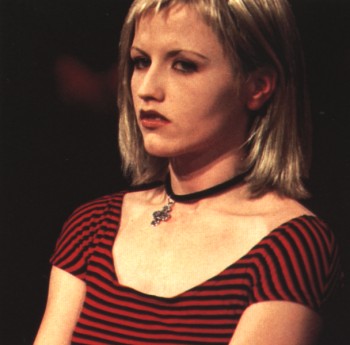 When I woke this morning, all I wanted to hear was the sweet sadness of Dolores O’Riordan, whom I listened to every day during the sweetest saddest period of my young womanhood and who died yesterday, only days before my 47th birthday, which really is the death knoll for any young womanhood no matter how well your people age (and mine age pretty well, dammit). When I listened most to Dolores and her Cranberries I was living with a man who took care of me but did not love me and whom I did not love. We had been performing a twentysomething fascimile of an old married couple and, really, it had been draining both of our life forces. We were just scared of everything else, especially of who we really were. Him: gladly, glamorously superficial. Me: a witch, not meant for anything but what I could conjure from the ashes of purple violets and patriarchy.

I always felt embarrassed to listen to the Cranberries. Back then they were considered soft and commercial if you’d spent your formative years moshing to SST and Sub Pop bands, which I had. Really all I liked was rhythm and blues that grabbed my heart and pussy, but like I said, I hadn’t accepted any of who or what I was yet, so I wasn’t accepting my musical predilections either. Somehow O’Riordan’s ragged hopefulness satisfied my yens without forcing me to cop to their existence. In general, the white lady singers I didn’t admit I liked in the mid 1990s are the only ones I still like: Natalie Merchant, Alanis Morissette, hell, Sarah McLachlan. It was misogyny–internalized misogyny, the most poisonous kind—that kept me from openly embracing their lilting melancholy, which is the only form of longing white women have been encouraged to express ever since America began identifying them as white. (Being a Jewess and a Sioux-Scot, my lines only started being sandbagged with whiteness when Aryan Nation was desperate to increase its numbers.)

So I’d sit on the floor of this man’s expensive shitty apartment in the Meatpacking District, worrying about the two calories I’d eaten that day and rereading my favorite smart-dame novels, and the Cranberries would fill that emptiness with a

gorgeous hunger of their own while the gorgeous hungry transwomen who then called themselves drag queens strutted their stuff below my window. It’s not just that I owe Dolores gratitude though lordy I owe it to her in boatloads, truckloads, spaceshiploads. Those transwomen neighbors, too; they taught me tons about fortitude and wit and the construction of femininity. But I owe Dolores and all my sisters from other misters apologies for being such a Frozen Charlotte when blood most wanted to pump in our veins. Life right before the explosion of social media and communication technology was not necessarily better for we ladygirls of the punk rock 90s though it’s being glorified right now. It was more authentic, maybe, but only in how it called out the distance looming between and within ourselves. Dolores O’Riordan was exactly my age, and she may have been a casualty of all that. My heart breaks if that’s the case. In her music she modeled an intimacy that was not just real and raw but finally, fearfully beautiful.