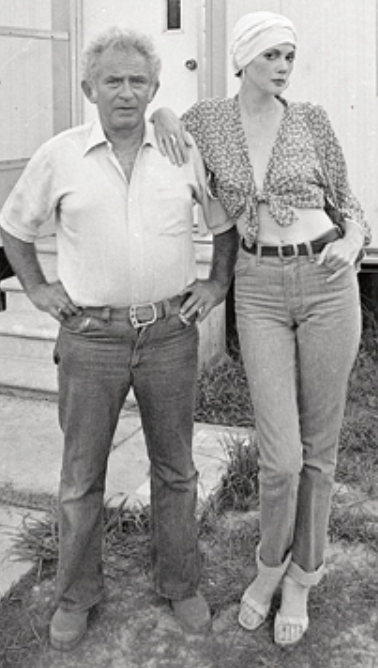 Norris with her bossy little husband.

Lately I’ve been wearing Norris Church Mailer’s castoffs around town. In the final years of the last Mrs. Mailer’s life, I had a friend who was dating her youngest and most toothsome son. It was no surprise, since the two (three, really) looked an awful lot alike, and when cancer whittled down the former Ford model’s once-impressive figure, I ended up with some of her size 12s.

Then in a rare bright spot of this dreadful spring, I realized her big bolts of glamour finally fit me. Rather than feeling like a paunchy, middle-aged failure, it was as if I’d grown into a woman I revered. Behold the power of the right second-hand piece.

I try not to write about what a terrible clotheshorse I am. It’s not a labels thing. I tend to look down on designer clothing, a residual of coming up in a town where the most flamboyantly wealthy people were also the blandest. What I dig are wildly individualized uniforms–projections of what and who a person is feeling on a given day. Audrey Hepburn on Acid! Space Crone Liberationist! Erma Bombeck Chic! Every outfit is a costume, an opportunity to radiate a unique frequency of light, and this requires an array of options that would appall a certain organizing guru whose surname starts with K and ends with O. As in uh-oh.

Blame the obsession on my mother, Sari. She’s always sewed beautifully– seam-stressed in the Lowell textile mills, studied fashion design at Massachusetts College of Art–so growing up I wore extra-sharp, hand-stitched clothing of her design. Rainbow pinafores, pastel plaid bell-bottoms, tee shirts and bathing suits personalized with a superhero shield: SuperLisa! Starting in elementary school I’d pour over August Vogues and then she and I would plot out my outfits for the new year–fabrics, patterns, the works. In first grade, I was obsessed with gauchos, sparkly kneesocks and matching tam o’shanters, and she made it all happen.

As I hit my double digits Sari and I found less common ground but continued to collaborate on clothes. I’d hit yardsales and thrift stores, and if a fabric, a color, even a Peter Pan 1940s collar caught my eye, I’d haggle with a baffled proprietor (no one expected an 11-year-old to drive a hard bargain) and my mom and I would repurpose the piece to my exact specifications. You should have seen my senior year prom dress. Fuck Pretty in Pink, it was a satin chartreuse affair that Prada himself would have envied. No one would have guessed it started as a size 18 robe excavated from Inman Square’s Dollar a Pound. 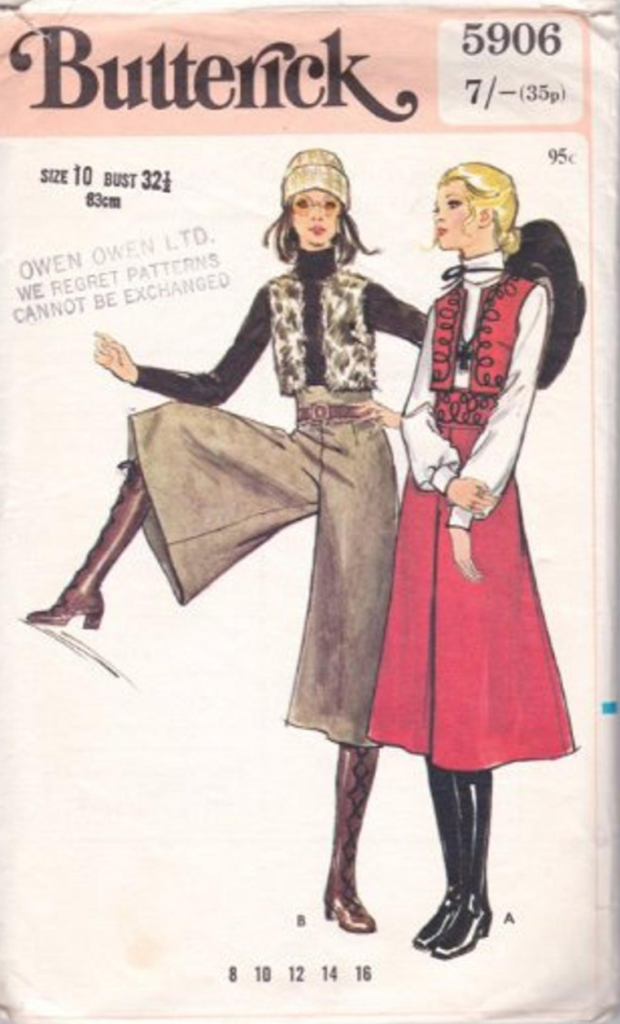 The rare pattern we bought.

Those adventures taught me to trust my intuition and creativity because I knew exactly what I wanted to look like and was blessed with an ally to realize that vision–so much so that I rarely cared that we didn’t have much cash.

Sari and I were a design label unto our own.

I mention this because it’s been years since we collaborated on clothes and I’m lousy at sewing; I inherited her flair but not her handiness. In a pinch I can replace a button or mend a tear, and I do have my grandmother’s old Singer with the foot pump, though these days it mostly serves as monument to her leonine spirit. Still I thrift or collaborate with a few local designers rather than pay full price; finding a brilliant piece for a buck remains my favorite way to blow off steam.* And still I get everything tailored, which is the secret to looking like a million bucks rather than a sadsack in hand-me-downs. I just lack the intoxicating fluency I once shared with my mother. Some things you can’t tailor yourself.
———–
*If I’m being honest, I dump mucho cashish on shoes. Cheap kicks will damn the cutest outfit.

N.B. I wrote this piece before discovering Gloria Vanderbilt had died. It was as if her sartorial witchery guided me to these words–a hand-stitched homage to our mothers of re-invention.