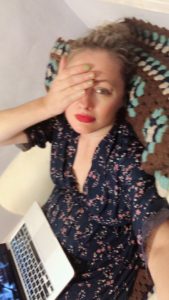 As I write this my head hurts, my stomach hurts, my heart hurts. This is because my period is due to arrive this morning like the fusillade of bricks that is menstruation when you are 48 years old.

Rest assured that as rough as PMS can be when you’re 18–and I remember it as a wicked pissah–it’s a billion times worse 30 years later, as if your menstruating self refuses to go out without a bang. This is something women don’t really talk about because there’s so much shame around menopause and getting older in general.

Anyway, the pain is so bad that I can’t work on my book today. But rarely does PMS fabricate anything wholecloth and so the truth is I’ve been feeling stuck for such a long time that part of me thinks I should scrap the entire book endeavor and find a line of work that, you know, actually pays. The problem: What exactly would that be for a woman rounding the corner to 50 who’s only word-played for a living? Not to mention that, even in dark stretches like this one, I remain convinced there’s a reason besides solipsism to share my story.

Also the universe keeps trying to redirect my hazy, lazy self.

Yesterday afternoon I parked on my stoop and read a French detective novel because whenever I’m feeling this bleak only crime stories resonate. What else produces tidy solutions, however finite, to the darkness of life?

While I basked in the Sunday sun, my friend C stopped by on her way back from C Town. She is exactly five months younger than me, has lived in our neighborhood her whole life, and has Down’s Syndrome. She also loves the color magenta—not light pink, she says with a specificity that I respect.

I have very strong feelings about colors as well.

C works at the gym where I work out–the city rec center down in the park– and we’ve both been cross about the new zumba instructor.

“She’s a bully,” I said now, as she showed me her grocery purchases. Recently C was diagnosed with diabetes so she’s trying to eat more carefully.

“She’s not nice,” C agreed. Then she slapped her hand over her mouth and started giggling. “I just remembered why I stopped by! I had a dream you and Xian took over the class and it was fun again.” I was honored. Xian is a former professional dancer from Beijing whom I admire as much for her 1970s kneesocks as for how she helps us in class.

As C sailed on down the street, my phone pinged with a message from D, a woman from college whom I’ve come to know through Facebook. (I can barely remember my college years.) Say what you will about social media but sometimes we receive each more warmly there, perhaps because the stakes aren’t as high. 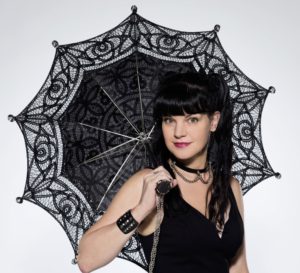 Though of course social media friends can’t hug you. (K is overseas again so it’s been too long since I was held by someone who cares about me as much as I care about them.)

She’d had a dream, D reported, in which she’d been enjoying a very successful book by NCIS’ Abby, a forensic detective interested in the supernatural, before she realized the book was written by me under a pseudonym.

I was fascinated. Not only had two people reported dreams about me in the same five-minute period but both had visualized realities I felt too demoralized to visualize for myself. The details were especially telling: my chosen disguise as a goth investigator, which felt right given my depressive reading matter and uncharacteristic pessimism. Also that I had showed up as a dance teacher days after I had written about being a shitty dance student. The universe was working hard to validate me through these women kind enough to serve as portals.

Just as I was marveling over all that gorgeous synchronicity, a sixtiesh woman ran up, panting. She was extremely thin and long, with a prominent skull, hair and skin tinted a curdled lemon, and large, white teeth and huge, darting eyes. Something odd that transcended the anxiety radiating off her in waves.

“Have you seen my keys?” she shouted though we were only six inches apart.

At her side stood a small cocker spaniel, looking at me with such wet, worried eyes that I stood up and tucked the paperback in my backpocket.

“When was the last time you saw them?”

“Oh,” she said, wringing her hands with a consternation that felt both real and phony, as if it were a gesture she’d seen so many times in old movies that she’d internalized it. “I was taking this one out on a walk and all of a sudden they were gone.”

The three of us retraced her steps. As the little dog and I poked around the sidewalk, the gutters, and the two garbage cans where she said she’d deposited his poop bags, she tripped along, chattering with the high breathiness codified as a dingbat voice when she was coming up.

Dingbat Shirley in Some Came Running.

I know that voice all too well, and consider it as violent as the baby voice affected by some young women today.

It was so disturbing that it took a good 20 minutes for me to absorb what she was saying. Which was that the lost set of keys belonged to her son, whose newborn she was babysitting while he was three hours away.

“Wait,” I said. “Where is your grandson now?” And why hadn’t she called the child her grandson?

“Oh, he’s in the apartment. I just was taking the dog for a walk.”

I stared at her, my blood rising. I knew who she reminded me of, though I couldn’t bring myself to name her. “And how long have you been gone?”

“Not too long, maybe an hour and a half,” she said. Then she began wringing her hands again. “Oh, I can’t tell my son that I lost the keys. It was his only set so he said I had to be careful. This was very irresponsible thing of me, and he’s gonna be so angry.” I understood what she was prompting me to say. That he should have had another set. That she only had been trying to help.

Mostly I understood that something was wrong besides the emergency she was describing. Hard experience had granted me this insight.

“Listen,” I said. “You can worry about what he thinks of you later. Right now you have to see if there’s a way he can get you into the apartment. Or we can call a locksmith or the fire department. But you have to back inside immediately. Your grandson is unsafe.”

She shook her head again, tears rolling down her face. “But my son will be so mad at me.”

“It’s okay,” I said, and pulled out my phone. “Now who should I call?” And at that, she galloped down the street to the subway stop, her dog trailing haplessly on his leash. She moved with an alacrity that was surprising in a woman of her years.

I watched her fading figure. Beneath her tears and wringing hands was a saboteur who might not have lost keys at all. Who might not even have had a son or grandson.

What was real was her perception of herself as a victim and her inability to connect.

——–
When I started this post, I didn’t know what to make of my Sunday afternoon, let alone why I was moved to write about it. But now I understand.

Because look at the chain of events. Two people dream what I dare not dream for myself and still I begin this post self-piteously, disconnected and adrift. Only upon writing the whole story out can I recognize not just [name redacted] but myself in this hysterical hustler of a middle-aged woman. This black hole who presented herself as beyond help.

I always have believed that the Devil is simply a black hole–the absence of love for self and others. In this capacity I have been possessed by my dark past. The very darkness I am struggling to exorcise by writing a bildungsRosman.

The very darkness I am gratefully exorcising in this post today.

For gratitude is one of the best tenets of the human contract. It lets in light. It reconnects us to each other and to our ideals.

And rest assured that if we don’t practice gratitude, the spiritual GPS of the universe will reconnect us by any means necessary–be it through dreams or curdled lemon ladies or something far more inconvenient.

The flow is mighty and it mightily invites us in.*

Fool on Tap
Grace and Taxes