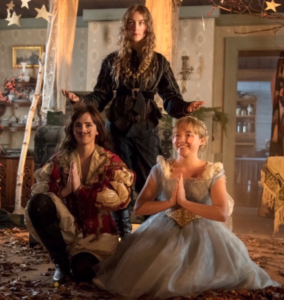 There have many, many film, television, and stage adaptations of Louisa May Alcott’s Civil War-set saga about four Massachusetts sisters who are rich in love and poor in cash, but this is the most ravishing and the first that does not betray the intense feminism of its author. Directed by mumblemouth millennial Greta Gerwig (cue my trepidation), it boasts an intensely good cast including Soirse Ronan as stalwart Jo, Meryl Streep mugging to unusually good effect as drolly disapproving Aunt March, Timotheeee Chalomet very right if too slight as Laurie, and Florence Pugh, channeling the authentically big emotions of Midsommar to animate Amy, the most bedazzled and entitled of the March girls. (Laura Dern is too Modern Millie for the Marnie of my dreams, but I’m immune to her Lynchian charms.)

This adaption is as well heeled and plated as an Ivory-Merchant but it’s far less conventional than prior adaptations of this YA novel with which I’m plainly obsessed. These little women’s stories are told unsequentially, for example, which neatly solves the problem of how to tuck their many chapters into two hours. And sly nods abound to the compromises Alcott made for her characters but not herself. Not for nothing does this Jo mouth Alcott’s most oft-quoted line–“I’d rather be a free spinster rowing her own canoe”–though it’s one the author never actuallygave for her literary stand-in, since selling her family’s story required filing down its edges. The ending frames this fact brilliantly ambiguously. An array of happy tableaus —amber waves of grain, every Jill with her Jack—haunted by a final spectre of Jo sola at the printers, clutching a volume of Little Women for dear life and in decidedly darker light. Thus the book’s warmth and wit is captured along with Alcott’s underlying conviction that a traditional happy ending 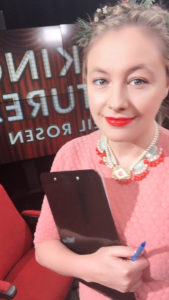 for women has always precluded economic and creative freedom.

So, so good that I responded with the ecstasy rather than anxiety of influence that great art always inspires in me. (Sorry, Harold Bloom). Since I was a little girl, it’s been Star Wars double buns, Mrs Whatsit chic, Anna Karenina furs–a form of flattery, you could argue, the March girls would have practiced had they traipsed into the 20th century. So to present the film on-air I adorned myself with cameo, high collar, long skirt, transcendentally trimmed hair. All that was missing was a clothespin on my nose.

And wouldn’t you know the boys– with the exception of me, this episode’s panel was purely cistraightwhitemale–were so busy talking over each other that they barely found te time to manterrupt me, let alone register my Amy adornments? Christopher Columbus, I don’t give a fig. I’m reasonably sure the little women who most need my talking points will receive them.

Anyway I’ve yet to hear of a canoe propelled by the male gaze, though inner children will always be welcome aboard.