As promised, I’ve been busy finishing not one but two writing projects. “Getting her done, son,” as a lover calls getting busy in all capacities. I’m not implying I’ve been getting laid left and right–just that I’ve been harnessing Saturn’s taskmaster drive to make things right and true. Maybe you have too? Capricorn season is all about hitting the new-year ground running.

But if you’ve been noticing things have been screwy over the last week, you’re not the one with the screw loose. It’s because at exactly 2:21 p.m. today the Sun in Capricorn faces off with a full moon in Cancer (also known as the Wolf Moon) to form a lunar eclipse that is some powerful shit. We’ve already been feeling the effects of homebody Crab in her home base of the moon as she crosses swords with tough-love Cappie: a lot of boundary-explosions and boundary-setting. I myself spent a day in traffic court on Tuesday as a result of last summer’s speeding ticket.

Any flaw in the love-and-money works is coming up to be fixed because tonight’s lunar eclipse marks the end of a story that began with July 2018’s new super moon in Cancer. What transactional dynamics masquerading as unconditional love have you been prodded to re-evaluate during this period? Especially with Saturn and “the great exposer” Pluto opposing this eclipse point, tonight’s full moon reveals and releases the trades we make in order to bask in “stability” or “power” (quotation marks necessary). 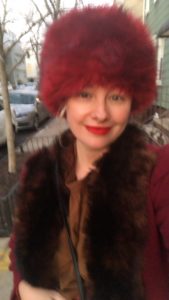 Consider this explosion to be like the ultimate facial–hideous in the short-term, gorgeous in the long haul.

So tonight ask yourself: How do I sell myself out? How do I try to control others to feel safe? Even if you don’t ask yourself, tonight the heavens are going to show you. So howl one relationship, habit, or gig that comes at too high a price. This lupine lunar eclipse is feral, she doesn’t mind. Then take a salt bath and light your cauldron or candle to release its residue. Just remember–always!–to hydrate!

For an ally in this trek from the overfamiliar to the deliciously, free, schedule a Ruby Intuition reading. Get in touch!