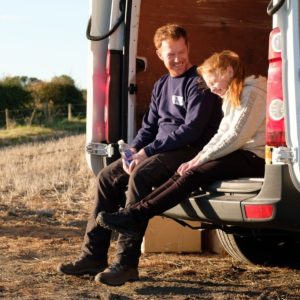 What follows is a review adapted from a lecture I gave to the delightful Westchester film club, now relocated to the Emelin Theater. Perhaps it is of note that I dressed as Emma Goldman to deliver this. Perhaps instead I should have gone full hog and climbed a table bearing a UNION sign. Either way, I now petition you to see this in theaters when you can; it opens in New York today at Film Forum.

For 50 years, director Ken Loach has made films championing the British working-class. They’ve always been acutely observed but as he’s aged they’ve become brilliant. Sadly, that’s partly because they’re driven by a greater urgency–they connect almost too well to the social drama of these fraught times.

His last project, I Daniel Blake, brilliantly confronted the benefit and welfare systems. Now, at 82, he’s indicting the gig economy with this film about a Newcastle family whose delivery driver dad, home aide mom, and two kids live precariously check-to-check. This is the kind of movie that is as worthy as it is wrenching–not just for the social messages it delivers, pardon the pun, but for the portrait it paints of familial love in the face of larger pressures.

Because I hail from a Northern Massachusetts clan that worked in the textile mills until they moved south and then abroad, and worked as a labor organizer throughout the 90s, I can attest that life for working people has gotten much, much worse lately—that those who were once working class are now sliding into an underclass and that many people whom you wouldn’t guess are financially, domestically, and/or food-insecure. So this movie hits home hard, and you don’t have to share my background to be personally affected by it.

Ironically, the same 2008 crisis that destabilized the family in this film also has destabilized the independent film world—making it increasingly difficult to patch together funding. So Loach has said in interviews that he finally felt ready to retire until he felt the call to tell the story of the many formerly middle-class workers toiling endless hours with zero benefits or protections, with only the downsides and none of the advantages of working for yourself. 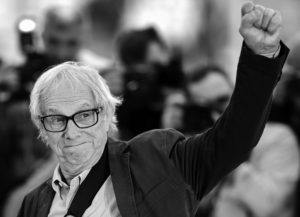 He and his longtime screenwriter Paul Laverty did what they’ve always done in preparation for their films—interviewed and shadowed people in relevant lines of work, then created stories based on theirs. Laverty has said that many delivery people were afraid to talk to him lest they jeopardize their jobs. Right there, that says so much.

The characters they created anchor this story in a way that perhaps a documentary never could, though this project does boast a cinema verité appeal. The film lays out the enormous pressures ordinary people face—including the price their kids pay–with great empathy and a minimum of sermonizing. Because of the expert storytelling and naturalistic and deeply felt acting, especially from Kris Hitchen and Debbie Honeywood as the parents, it reads as a suspense thriller–one whose harrowingly high stakes are the same ones facing lower-income workers all around today’s have-and-have-not world.

PDF, the delivery company Ricky works for, is founded on the notion that its system of independent drivers is a sweet deal for the drivers themselves, when the truth is that Ricky and the other drivers comprise the exact opposite of a union: It’s almost built into the company’s design that its workers compete and work to death, possibly literally.

Because this gig economy has made a new generation of indentured servants, it’s only fitting that this is a sort of digital-era Dickens saga, staged and paced as boldly as a film by Loach’s countryman, the great dramatist Mike Leigh.

Interestingly, Loach always shoots in sequence and tells the actors only what they need to know in a given scene, so their reactions are less studied than extemporaneous. He also is inclined to cast less experienced actors. Hitchen, who plays father Ricky and looks like a working class Damien Lewis, became an actor at 40 after a lifetime of working as a self-employed plumber. Here he does an extraordinary job of channeling the emotional complexity of a hothead trying to support his family in an economy that doesn’t support him–of a “man’s man” cleaving to mores that no longer apply. 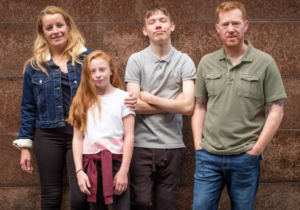 But the true star is Honeywood as mother Abby. This is one of her first onscreen roles but I hope it won’t be her last. With her slowly blinking gaze and soft voice, she anchors the film and invests us in these issues, this family, this human condition.

These characters’ breakdowns are the dramatic breakthroughs
—mostly the boiling points experienced by Rickie and mirrored and exacerbated by teenage son Seb, an undeniably frustrating piece of work. But it’s when ordinarily patient and sweet-spoken Abbie loses her stuff that the film stop in its tracks.

You know that for a person like her to lose it, the circumstances are truly untenable. And you believe that everyone in this family cares about each other and still maintains a core of decency and compassion. Which is why this ending, without disclosing a spoiler, is not just realistic. It’s heartbreaking.

And it provokes us to consider useful, if devastating points. We all buy things online and get things delivered. We all know somebody who has been through

the care system and has been treated well by someone being economically mistreated themselves. Is it worth it to create an economy in which people are working under such pressure, with such a terrible domino effect on their friends and family and overall quality of life?

The best message movies heed that old slogan—think global, act locally—and by making us care about this family Loach is inviting us to care about the regularly inhumane circumstances that pull them apart. It turns out you love is not all you need. We also need fair labor practices.

Now We Must Listen
The Church of Gentle Luxury