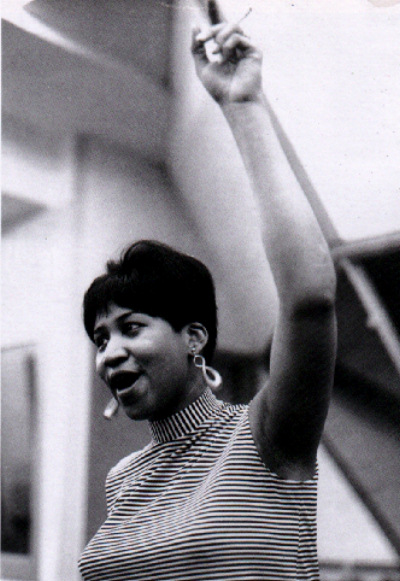 There are times when the only singer I can bear to hear is Aretha Franklin. She doesn’t belong to any one of my former relationships. She doesn’t belong to any particular era of my life. She belongs to all of them or, rather, everything belongs to her. I know every one of her songs inside and out, and have been learning them since before I could talk. Our family cat, adopted 18 months after my birth, was named Aretha Franklin Rosman. It’s like that. I have every album recorded by this woman, and most of them on vinyl. Sometimes when I’m feeling blue I just ogle her record covers. She’s unfathomably beautiful—feline and sly-eyed and blowsily ladycurvy—and I know everything divine and earthly rolls through that big, matter-of-factly churchified and cracked-up, sooth-the-savage-beast of a voice. I need her to be strong so I can be strong, and in her music, as far as back as her Columbia Records years, she has never, ever let me down. I don’t care about her personal life, and I really don’t want to have coffee with her, no more than I’d like to have tea with the Queen of England. Royals, especially those who have earned their throne, are best worshipped from afar. I know someday she won’t be on the same planet as me but I’m grateful she has been for so long and even more grateful that her music pours through my ears when I leave that man, tote that barge, straighten that spine, open that heart in all my worst and best moments. Truly, Aretha is the Queen of Soul, and I am lucky to have lived under her reign. We all are.