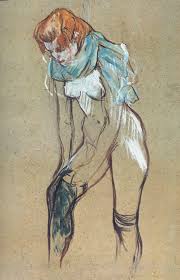 He had oysters waiting for me. I keep thinking about it. I showed up late for dinner and he had oysters waiting for me and I threw them in his face. But if he wasn’t going to come around when it counted that’s what he was going to get. I know this as my ugliness slays me. We cannot be in touch. We want different things. I want him to be the friend of my heart, and he wants me as his sometimes companion. It boils down to that. I do not blame either of us but know I need something else. Someone else. I act badly because he never stays; he never stays because I act badly. We have been in this cycle for more than five years and during that time I’ve learned all too well to live without him–to live creatively and tenaciously with a broken heart. So I know I’ll be okay, will pick myself back up, will put on the red lipstick I bought so hopefully only a few days before. Maybe someday even stop waiting for that pearl. Today, though, I’m having a hard time moving. Forget about eating. He had oysters waiting for me and I threw them in his face.

The Unacceptable Agitprop of ’13 Hours’
This Year’s Laundry