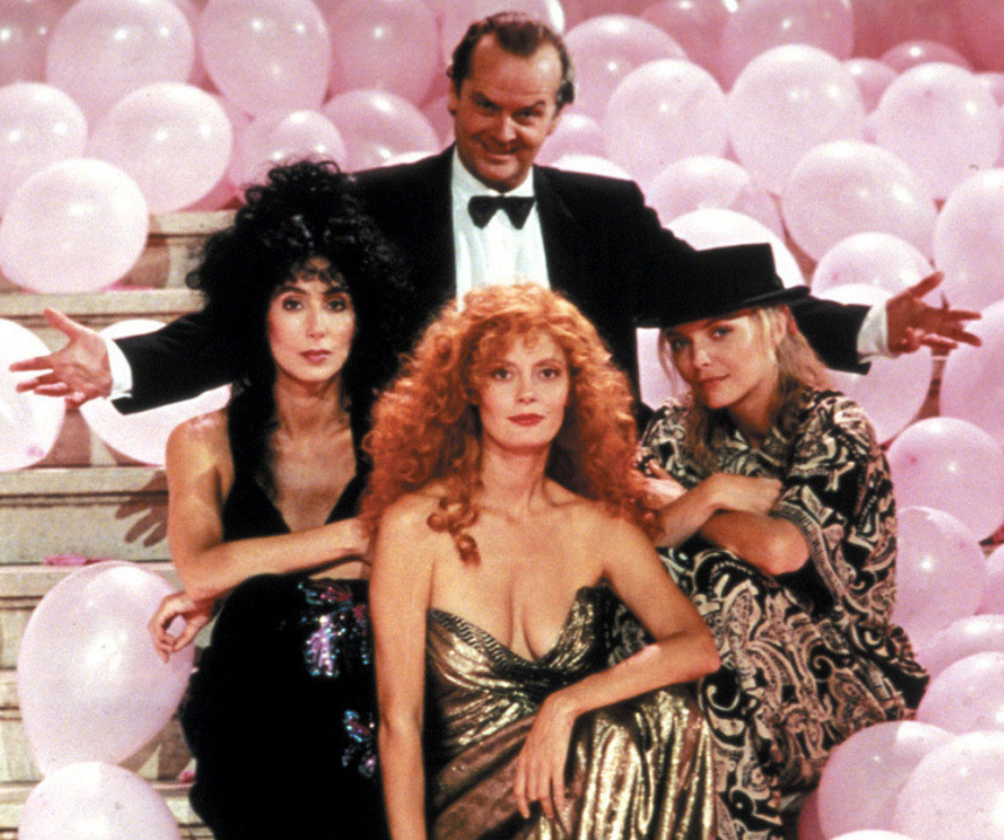 Though the toast of the town while alive, John Updike has fallen out of favor since his 2009 death. Perhaps this is because literary styles have changed, and the notoriously prolific writer’s Proustian effusions and adverbial chattiness have no place amid the muscular, subject-verb prose in vogue right now. But Updike’s oeuvre also has the sort of “woman problem” that is less tolerated with every passing year. It’s not that he wasn’t fascinated by women – his work is arguably as awash in female bodily fluids as any male writer since James Joyce – but there lurks a hate-love dynamic in it as well. Rooted in his books is the premise that women may be the source of all life but also the source of all trouble – a conflict best exemplified in 1984’s The Witches of Eastwick. Set in a fictional New England town, it focuses on three women whose latent magical powers materialize when a well-heeled stranger rolls into town and beds each of them. Though some hailed the book as a triumph of pagan feminism, others saw it as retrogressive, especially as a man is required to rouse these women into action.

A teenager at the time of its publication, I found Witches to be a reasonable homage to women’s ordinary and extraordinary powers, as well as our unfortunate tendency to defer them. I adored Updike’s raptures about sex and food and witchery; it was as if I’d finally found someone who wrote about allegedly adult subjects with the enthusiasm of a children’s book author. When “Mad Max” director George Miller adapted the film to screen in 1987, the result – a punk rock fairy tale of gold lamé and rolling green fields and Venus figurines – was even better.

As widowed town sculptress Alexandra, a relatively undoctored Cher grounds out the story. Bored with small-town life, she and two divorced besties – town reporter Sukie (Michelle Pfeiffer) and cellist Jane (Susan Sarandon) –describe their ideal lover over martinis. Because they unwittingly comprise a coven, their words summon Darryl Van Horne (Jack Nicholson), a wealthy Jack of All Trades who manages to seduce all three by honing in on exactly what they need. A predator? Sure. A devil, even. But at least for a while, one who fills their every desire in sumptuous,

idiosyncratic style. In one of my favorite film sequences of the 1980s, a central montage features Nicholson waltzing the ladies and their many children through a vast ballroom filled with pink balloons until they are all soaring above an indoor pool adorned with Grecian statues and lily pads. Gorgeous, darling.

What’s interesting is that Pfeiffer, Sarandon, and Cher look so alike here though they’re radically different women. Each boasts long-lashed saucer-eyes, Esther Williams gams, rosy pouts, and a swoon of pre-Raphaelite curls – Sarandon’s were a peculiar pink-orange never seen after 1988; Pfeiffer’s were so permed that it’s a wonder her hair didn’t fall out. You know you’re amid serious beauty when Michelle P. reads as the resident plain Jane – she wore metallic paisley jumpsuits and Keds next to Cher and Sarandon’s mermaid gowns and glass – but their similarity seemed to speak to a deliberate objectification. Insert three muses here.

Lest you think I’m dwelling too much on aesthetics, understand that this is where Miller’s film, like Updike’s books, was at, baby. Forget nurture. This film was all about nature in its wildest manifestations, and what could be wilder than the female form? For both men, God was in the details – the pussy, really – and late-1980s Nicholson served as his perfect, predatory foe. Sporting a tiny ponytail, flapping silk robes, and that on-brand devilish grin, he growls and whines–rolling his big belly around on canopied beds, walloping tennis balls and buttocks with equal zeal–but is perfectly happy so long as all that lady love is directed at him. It is only when the women, sensing his evildoing in the town, grow una-Mused that he reveals his fangs. His ensuing speech is a vitriolic rant against the gaping maw he perceives as femalehood:

Do you think God knew what He was doing when He created woman? Or do you think it was another one of His minor mistakes like tidal waves, earthquakes, FLOODS? You think women are like that? S’matter? You don’t think God makes mistakes? Of course He does. We ALL make mistakes. Of course, when WE make mistakes they call it evil. When GOD makes mistakes, they call it … nature. So whaddya think? Women … a mistake … or DID HE DO IT TO US ON PURPOSE?

In the years since this film’s release, feminism has morphed from a womb-centric celebration of womanhood to a complex deconstruction of gender and sexuality; the only common denominator is the campaign for equal rights. In the wake of this evolution, the essentialism of “Witches of Eastwick,” like Updike himself, has become a bit of a relic. It holds up because of its eternally arched eyebrows and fabulous design and because it so voluptuously explores the pit-pedestal intersection of misogyny and philogyny – as well as the glittering narcissism of men who will do anything to fill their bottomless holes. In this last instance, the film has become newly revelatory. Darryl Van Horne is a lot like a certain commander-in-chief, and our country is like those damsels dangerously unacquainted with her own power. The “woman problem” persists.

The Church of Thoreau
‘Anne With an E’ Gets a B