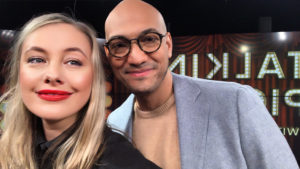 Yesterday was kind of brilliant. The boys and I taped an episode of Talking Pictures, and for the first time since the show migrated from Spectrum to PBS achieved the right balance of jocularity and specificity. Which is to say: I got my points across with some style and minimal manterruption, and we all laughed a lot.

Afterward I had enough cash in my pocket to eat out properly, so I joined up with my friend Little Lisa. In generosity of spirit and strength of mind she is no way little, but as we share a first name and I grew up in an Italian-American neighborhood where people of the same name are distinguished by the prefix “Big” or “Little,” Little Lisa she is. To be fair, LL is 7 inches shorter than me and a good 16 years younger.

Big of heart, though, believe me.

Once upon a time we worked together at NY1–she was often the only other broad in the studio when I was on set–but these days she’s a fancy lady producer at a major network and I’m, well–that’s a good question. What am I right now?

We Lisas meet up every few months to see a film through my critic connections or a play through her Broadway connections. Because we’re the earliest of birds, we meet up beforehand to drink and eat and talk of Big and Little things. That’s how I most like to visit with all my dear friends: Commune, consume delicious things, climb into bed by 10.

So while this October weather was especially atmospheric and I was still decked out in Muppet Critic drag–boatloads of red lipstick, a red fur-trimmed coat I snagged for a song, a wriggly pencil skirt–we met up at an Italian joint on the very west side. Rain beating against the windows, we drank cocktails and a whole bottle of wine as I bossed around a handsome Milanese waiter who batted big brown eyes and fetched us things off the menu. I swear, all that was missing was a sax player in sillhouette. 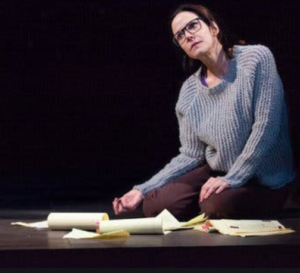 The Sound Inside, the play we saw afterward, is fantastic despite its unappealing setup. Written by Adam Rapp, it stars Mary Louise Parker as an unmarried, 50ish novelist and Yale professor who, upon receiving a cancer diagnosis, commences an affair with her 19-year-old (white male) student. Or does she? This is a play about female authority and female authorship–about the twin denotations of the words “birth” and “creation”–and it raises excellent questions about what happens when women control narratives the way men traditionally have.

When she was younger, Parker’s rumpled, disappointed affect–slight drawl, slight sneer, slight prettiness–struck me as Wendy Whiner bullshit, but in middle age she’s hardened into something sharper and shinier. It’s as if being young simply didn’t suit this crazy diamond–that being pluckable caused her to grow extra edges.

Awash in an expressive darkness–light pools on the stage as if it’s the meager heat shed by a radiator–the play itself is about naming things, framing things; about being adrift and alone in the cold world and your own coldness; about writing people (even yourself) in and out of existence. Appropriately and ecstatically, the language is ferociously specific, especially on the topic of writing and reading. I know, I know: meta, meta everywhere, and not a drop to drink. But the running interior monologue of a woman who never doubts her intellect and impressions, who accepts she sees much more than she is seen, intoxicates.

I don’t think this is a play that only lands with creative people, but as a (nearly) 50something writer, it felt like she was talking directly to me, which is an experience I never have. As much as I embrace a wide range of art, usually what resonates are the eagle-eye views of worlds resoundingly not my own.

In front of us sat Harvey Keitel–puckish, wizened, engaged–and as the lights came on (at 90 minutes, the play is blissfully short), he swiveled around to smile broadly at both of us, not lasciviously so much as rapturously. It seemed so right that all this future past perfect was taking place at the former Studio 54.

We emerged into the rain blurring beautifully with the bright lights big city, and kissed each other hastily on the cheek before hurrying back to our separate hearths, hers uptown on the fancy-lady East Side.

But before descending into the 59th Street A train, I stopped and smiled.

Because despite the fact that I’ve barely left my neighborhood lately, I’d been at this exact corner only the night before for a critics’ screening of Terminator: Dark Fate. Consider it the most ground-breaking installment in the Terminator franchise since T2, which, hi, instructed American audiences in the appeal of female muscle. Sure, the time-travel grammar of these films never really works, but time-travel grammar never does; if it did, we’d already be time-traveling, wouldn’t we? 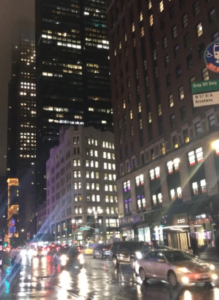 This film is set on both sides of the Mexico-US border, and begins in Mexico City, where a terminator has been dispatched to kill Dani (Natalia Ramos), a factory worker who’s vital to yet another apocalyptic future– one hatched after Sarah Connor (Linda Hamilton) headed off the last one by saving herself and her second-coming son John. Grace (the strapping MacKenzie Davis, of the queer-courtship “San Junipero” Black Mirror episode and the blah-baby Blade Runner redux) plays an “augmented” woman dispatched from the same alternate future to save Dani. But whenever this cyborg amazon can’t re-up her Bozo-Byzantine drug-cocktail (her augmentation protoctol could use a V. 2.0), a whiskey-grizzled 60something Sarah Connor elbows in, toting nuclear-level blasters and bitterness. Picture your scariest middle school teacher crossbred with late-career Clint Eastwood, and you’re halfway to the genius that is 63-year-old Hamilton here.

Sarah assumes Dani is like her: a tough-titties Mother Mary type. But when (spoiler alert) the Latinx woman is revealed as something far more powerful, TDF establishes itself as the latest in a new genre of action films, one that doesn’t reinforce white-supremacist cis-cockocracy so much as introduce a new world worth fighting for.

I’ve never been fan of King of the World James Cameron’s mouthiness, but the producer has advanced the genre more than anyone save Ryan Coogler (Black Panther). Also this movie is fucking hot. It’s amazing to watch an action film starring three powerful broads (and, adjacently, one hasbian California governor). It’s even more amazing that one of them is in her 60s and singlehandedly introduces a new trope–the power crone–though in retrospect such a heroine was inevitable. What’s more powerful than a female who not only has saved the future of the human race and survived murderous cyborgs but also sexism and menopause? To boot: With boatloads of compassion and conviction, Natalia Reyes makes a swashbuckling heroine, and a seriously ripped MacKenzie Davis decked out in a husband-beater and a Joan of Arc bowl cut is my new dreamboat.

Also–not to bury my lede–but I just loved-loved-loved that this film matter-of-factly folds in a critique of our “detainee system,” calling out the camps as a strain of domestic terrorism as dystopic as anything in Grace’s 2040. 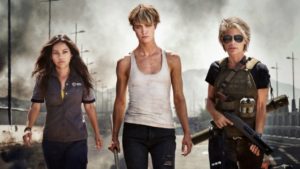 The future America of TDF is Latinx feminist-forward, as any non-dystopian America will likely be.

—-
I’ve been so sad lately because I’ve been having a hard time imagining any kind of happy future. I can’t figure out where my book will live if and when I finish it. I can’t sort out a reliable, sustainable income source, though I’m so grateful money keeps showing up so long as I keep writing.

And I haven’t figured out who my next lover should or could be.

When I tell all this to my shrink, she has the nerve to say, “Good.” By this she means that not knowing means I am allowing room for the unknown–for the radical receptivity necessary for all positive change. But I find it terrifying that just as my peers are settling into a more comfortable chapter of their lives, I’m perched on the precipice of a cliff.

I always figured I’d be safe from a midlife crisis since I had such a significant pre-life crisis. I figured wrong. But seeing these two works of art back-to-back heartened me, and I’m not just saying this for the purpose of wrapping up this suddenly bleak post with a pretty bow.

I’m heartened because I’m reminded that just at the age when women–and by women, I mean everyone bold enough to call themselves woman–are told we’re no longer of use is when we become powerful. Liberated from undue attention, we finally focus on what we see rather than how we’re seen.

And fuck shit up accordingly. 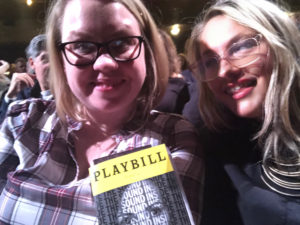 Future goggles at the former Studio 54.

The #metoo movement didn’t launch the sudden and seismic changes I’d hoped it would, but a new canon is rising nonetheless. For consider one more homograph: utopia. Meaning both perfect place and no place, a utopia is about the process of striving for an ideal–a necessary means that is gorgeously an end unto itself.

To that end, perhaps the future I fear can be supplanted by revolutionary self-possession in the present. You know: dowager chic in all its don’t-bow, don’t-bother, don’t-blink badassery.

The Coldest Home Is Memory
The Church of Scorpio New Moon