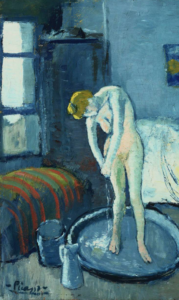 I woke on a whole river of sadness–an ocean, even. My apartment cold, my permakitten anxious, my heart heavy. Still not cast ashore.

In October we are capsized by abruptly cold weather no matter how much we long for it. The veil between this world and the next lifts just as abruptly.

I’d been dreaming of all the couches where I perched in my childhood–all the family homes where I briefly ingratiated myself, not because I craved the companionship of peers or the comfort of uncomplicated adults, but because I’d craved order and cleanliness. Coziness.

Even now, though my mother and I rarely speak, I hesitate to write about the disorder of my family home. It is sexist that the blame landed so resoundingly on her shoulders but the truth is it was mostly her fault. She and my father had one of those fucked-up divisions of labors that a creative person like her should never have attempted–he made money, she kept house. I knew she was bored, I knew she was unhappy, I knew she was profoundly ill-suited to this suburban pathology masquerading as mythology. I also knew she couldn’t think of anything else to do so she sat at the kitchen table day in and day out, drinking cold coffee, slowly reading the paper, looking out the window.

And, you know, not keeping house.

Keep in mind it wasn’t the 1940s but the 1970s. Women’s liberation was happening all around her. It just came too late for her purposes.

To be honest, I’m not convinced it was a train she ever would have boarded.

It wasn’t just that she was depressed. It was her conditioning.

Great disorder was a hallmark of her family; great disappointment, too. Her mother’s house was a mess, so were her siblings’. And I’m not talking about mere dishevelment—a few misplaced books, a sink of unwashed dishes. I’m talking about cat shit crunching beneath your feet, spills never wiped away, other people’s castoffs dragged in from the garbage. Ants and flies. Broken lightbulbs, broken faucets, broken chairs. Closets stuffed with stained coats that fit no one, rooms swelling with dreams long dead, resentments long stored.

A coldness prevailed; a darkness and cacophony, too: Squabbles and blaring radios and televisons.

To this day, I prefer bracing overhead lights, ridiculously overheated rooms, carefully curated soundscapes. No corners where danger can lurk, cruelty can trap you. No din in which you will drown.

Because a voracious chaos reigned, an immeasurable and energetically unsurmountable chaos that smelled like a body buried in the cushions of a couch. The metaphor is especially apt because I lived in fear of losing everything–a homework assignment, a favorite shirt, my health, my heart. If I left something anywhere, it disappeared forever. Especially if I relaxed on a couch. There was a sense that nothing could get fixed or cleared. Just swallowed.

A better metaphor for our house: a black hole.

My father blamed the mess on me, and my mother encouraged him to do so. A child who wasn’t picking up after herself, what could she do? Then, after my sister was born: two children.

You can ask: Why not clean it yourself? My answer: I did not know it was an option. The chaos didn’t just overwhelm my small self. It defined me.

And so I adapted, mostly by blocking out my reality entirely–I read every second that I was awake in our house–and by appending myself to other families.

One of the greatest gifts my therapist ever gave me was the revelation that I naturally am an introvert. She pointed this out because even in my thirties I still was in the business of singing for my supper not for money or fame, but for the privilege of settling on others’ couches.

All I’ve ever really longed for is a clean, well-appointed room in which to read in voluptuous silence. And what I learned as a child was how much I’d do to satisfy that longing–put up with dumb or unkind kids, parents, lovers. So long as they had a cozy couch where I could curl up.

Eventually I gave myself that couch, though never the assurance that it wouldn’t be taken away again. As I write this I still fear I won’t find the income to keep a roof over my head, a kitten on my feet. Even as I write this my couch is wobbling and I can’t afford a replacement.

It is not even really a couch so much as a divan–something short that fits the life I still try to fit as well.

When my back went out last weekend, I did something that greatly confused the friend who stopped by with supplies. I cleaned it from top to bottom before surrendering to the spasm.

“I’ll never recover if I’m stuck in a mess,” I said, and tears streamed more from the shame about being that dirty kid than the not-insignificant pain.

I got better, I always do. But the cold of my unheated apartment got in my bones.

Then last night my highest spirit took me in hand and walked me through the neighborhood of my childhood–the small creeks, baseball diamonds, five and dimes, movie theater where I spent so much time. Even the mobbed-up convenience store and the packie. And of course all those ranch houses where I huddled on plaid couches, plastic-covered couches, any fucking couches until I wore the wrong thing, said the wrong thing, noticed the wrong thing (nearly all families harbor terrible secrets).

And was not invited back.

In my dream I didn’t just see the sad girl and the old neighborhood. Over and over I registered the brief respite granted by another family’s home and the subsequent, shoulder-sagging disappointment when I had to 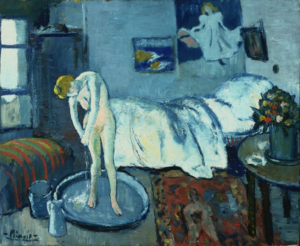 When I was banished once again to my own home. Where I’d pick up a book until I had the heart to append myself again.

From last night’s dream I received information both precious and devastating. That the only way I got through everything was by reading it away. And that I write to foster others the way books have fostered me.

And so of course I fear failure.

Peri, My Ass
Of Homographic Utopias and Dowager Chic (The Sound Inside, Terminator: Dark Fate)