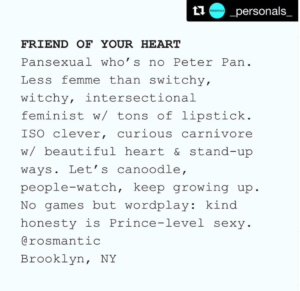 My grandmother Alice was an exceptional woman. Though she received very little formal education she was an autodidact par excellence and well-versed on topics ranging from train engineering to transcendentalism. But what I loved most about her was her great equanimity. Though she lived most of her life in an especially intolerant corner of Massachusetts and died in the Reagan 1980s, she was brilliantly open-hearted when it came to matters of race, sexuality, religion, gender, class. Her only true bias was against Presbytarians, whom, for whatever reason, she found ridiculous. When I’d ask about that, she’d shrug. “Everyone has a bias,” she’d say, “and that’s mine.” Well, I’ll be super super honest. When it come to dating, my only true bias is against vegans. As far as I’m concerned, a romantic connection that works on many levels is so rare that it’s ridiculous to rule anyone out on the basis of gender or age (within the realm of decency) or race or class or physical type.* But I will never date a vegan again. Life is too short to maw impossible burgers when there’s sirloin to be had.
*I have my preferences, but that’s for a different post.

The Blue, Blue Bridge of Twelve Novembers
No Room to Let (Dowager Chic)