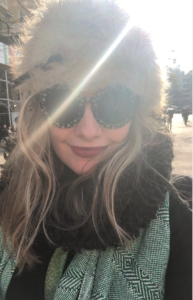 “No more equivocating,” said Jennifer when I left her office yesterday. She almost didn’t need to say it aloud except, of course, she did.

Since my back returned to seminormal—since the last great road block of the Year of 12 Novembers was finally removed—I have been doing my very best to finish this book.

Or should I say: this fucking book.

The funny thing is, I’m looking forward to editing this behemoth. I always say that I write like a pagan and edit like a Jew, and though it’s a suspiciously catchy phrase, it’s also true. Mostly. But I haven’t been writing this book like a pagan. I’ve been writing it like a flat-out witch-—channeling people I purposefully haven’t seen in years, conjuring  the past in the present, re-experiencing everything in the most messed-up method writer sort of way.

But though I’ve been conspicuously silent here over the last few weeks, it hasn’t been a terrible holiday season. Oh, I’ve made some mistakes–whoever thinks you automatically get smarter as you age really isn’t getting smarter—but nothing permanently damning.

I actually like the holidays—the parties, pine, sense of being outside of linear time. Most years I plan local adventures—old films on big screens and trips to the mermaid woods. But this season has been different because I’ve understood that for my sanity and fundamental survival I must complete a first draft by my personal new year, which is January 19 (my birthday).

Its deep skepticism of blood bonds and Deneuve’s red-lipped what-the-fuckery hitting the spot something fierce.

My sense is I can pull off this deadline if I stop whatever equivocating I’m still doing and accept the loneliness completion will bring. No more misbegotten love affairs, no more ill-advised distractions, 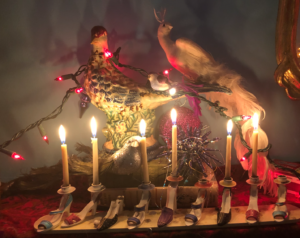 no electricity period save true friends of my heart and the shine of these words as they appear one after another on this path into a wickedly enchanted forest. (Reading for people also is connecting me to that collective divine.) So in the wake of winter solstice and solar eclipse, I’m asking my greatest ally

here, where she’ll be held most accountable—

From my Mary-loving Jewish pagan hearth, I send all the love in my heart to light these longest nights. We are all, each of us, blessed, and it has been an honor to bask in your shine.

No sleep til draft 1 is done, kittens. See you on the other side!