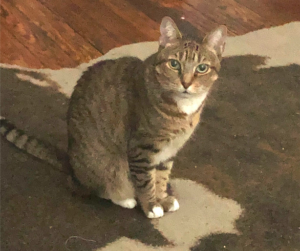 So I’ve been laid up for the last three days with my now-annual autumnal bad back. This year I chalk it up to being a middle-aged woman who danced all Saturday night and then ran a victory lap around lower Manhattan on a broken baby toe. That, and the Slow-Moving Coup the Trump administration is attempting to stage in the shadow of Biden’s inarguable victory. People I love and trust tell me it’s all going to be ok but anyone with genocide in their family lines doesn’t rest easily while a fascist is refusing to cede office.

On every level, in every way, Donald J. Trump’s mic should be cut. No social media. No quotes reported by news outlets. Yes, document the policies he’s pushing through, the terrifying appointments he’s making. But don’t grant his ravings a platform. The amount of chaos and hatred he can still sow is dangerous, if not lethal. Let’s not exacerbate this.

All to say that while I’ve been largely immobile a certain furry roommate has been acting peculiar and finally yesterday gallumphed into my bedroom with a living mouse in her mouth. After triumphantly laying the vermin at my feet, she recommenced chasing it in a dance that went on for two hours–Grace’s happy squawks and the mouse’s fainter squeaks punctuated by the duo’s dashes to where I was, gulp, lying on the floor. This permakitten was in permakitten heaven. I could tell in her mind she even had named this new playmate. “Herman,” maybe–“Hermie” for short.

Finally I pulled Little Miss onto my lap to gaze into her big green eyes. “Look,” I said. “We Rosman girls work for a living and you have one job, which is to eliminate vermin. So do it and stop lollygagging.” Some claim animals can’t understand language, but my (over)familiar certainly can. Because soon after this stern speech, the squealing and squawking stopped. I heaved myself into the front room to find her standing very sadly and silently over the corpse of one “Hermie” Herman Mouse, once befriended, now beheaded.

A day later I have yet to be forgiven. I accept these terms much as lawmakers and the press should accept the ramifications of doing the right thing.

For I hope all this kerfuffle stems from the dying embers of the Mars Retrograde which, thank Goddess, officially ends November 13. It would explain the myriad dental and bone problems everyone has been experiencing this fall. It would explain the bloodshed in my front room. And it would explain the electoral chaos that has persisted days after any healthy democracy would have declared Trump the loser that he is.

But I know this retrograde, like all retrogrades, only has revealed shadows, not caused them. That the real culprits are the still-burning embers of the Civil War, of the colonialism rotting this land since British religious cultists deemed its Northeastern corner “New England” with their signature lack of flair. And that, since then, moral crime upon moral crime has been committed with no real reparations and many hypocritical hymns of social justice.

As a healer and intuitive who survived a truly fraught childhood, I always have rejected the mandate—the hegemony, really–of “forgiveness” that is shoved down the throats of the abused and disenfranchised. Over time I have made peace with my past, and for this I am deeply grateful. But forgiveness is a contract, and for it to be legitimately bestowed, self-reckoning and practical repentance is required of the abusers. Let those who have been hurt by this administration and its followers—by this country overall— heal at their own pace and on their own schedule. 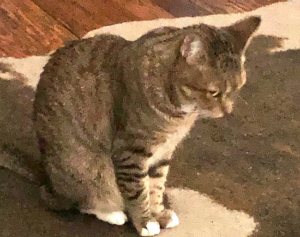 And rather than bend over backwards for the many, mostly white Americans who supported this regime of hate and inequity, let us focus on building a truly just social infrastructure that cannot be toppled and to which all are welcome—so long as they respect its twin tenets of institutionalized compassion and true equality.

May we all mend. And may my sweetly striped familiar find it in her heart to accept my atonement. What can I say? At the end of the day, I just don’t like a mouse in my house–all metaphors attendant.