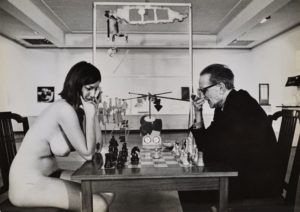 Evie playing chess with Duchamp to make boyfriend Walter Hopps jealous. My guess is that it worked.

Once upon a time, the brilliant essayist Eve Babitz was also a painter. In the 1960s she was not only known for her magical groupie powers but for some of the key album covers of that decade–most notably a collage for 1967’s Buffalo Springfield Again. And although she had limited patience for movie stars (she did deign to fuck a young Harrison Ford, but then he was mostly a weed dealer and shoddy carpenter), she hobnobbed with some of America’s most-touted artists–among them Annie Leibovitz, Ed Ruscha, Andy Warhol, and Marcel Duchamp. (Only one of the aforementioned never saw her naked in person.)

But one day Evie put away her brushes for good. And the reason, at least according to every teller of the tale (including Eve, who is honest if not exactly truthful), can be traced to one seemingly offhand remark by Earl McGrath. A sort of Oliver Wilde-cum-Leonardo Da Vinci-cum Frank Abagnale Jr cad-about-town who quite possibly was her only true match and definitely her only worthy frenenemy*, McGrath gazed upon one of her paintings.

And after an exceptionally pregnant pause, said only: “Is that the blue you’re using?” END_OF_DOCUMENT_TOKEN_TO_BE_REPLACED 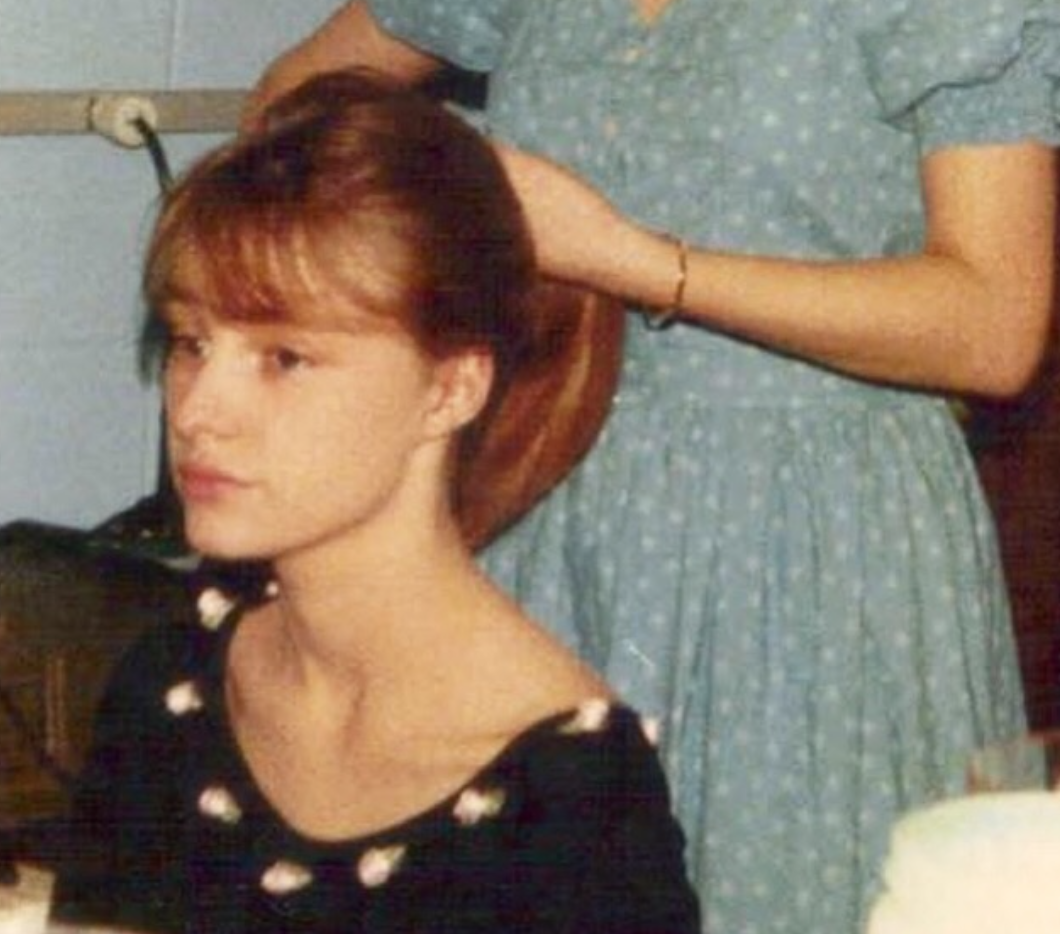 Mercury retrograde being the wily mistress that she is, this photo capsized my computer today as an uninvited screensaver. It’s me at 15, getting my hair done so I could play the wackadoo Essie in a high school production of You Can’t Take It With You. Part of me wonders if the wily boy who played my husband in that show engineered this mischief. Stephen was a kind-eyed bad boy who died far too young.

My mother sewed the rosebuds on that leotard; I loved it so much. But what I notice most–and maybe the real reason for this oddbot magic—is how otherwise-unadorned I seem. Even at that age, I was always “on” in the presence of other people-—big grin, big lipstick, big shtick. Yet there I am, no makeup, no “camera-ready” face, just quietly submitting to an older girl’s ministrations. Even my hair is its natural color. In the eye of an eclipse season that’s blowing up the facades in our relationships, this picture makes me weepy. I’ve always been a feral sort of girl, but there I am, lapping up the mommy love. We’re never too old for mommy love. 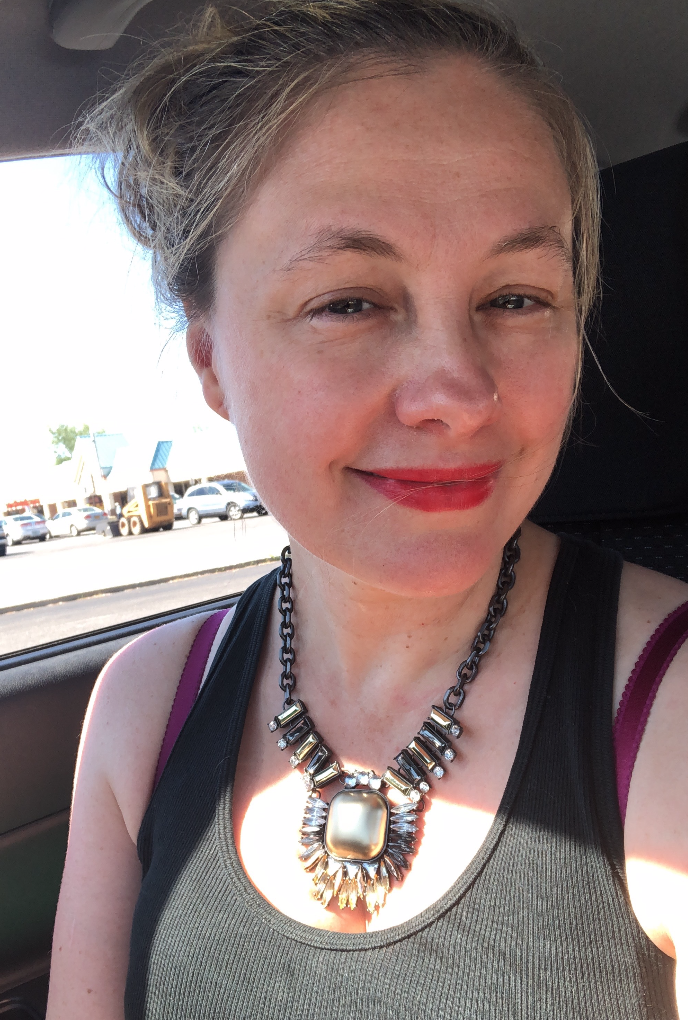 So I’ve been having one of Those Weeks (years, but who’s counting?). Lots of luck but not all of it good. To wit, this week I am in Hudson (good) staying with Grace and Daisy the Dog (good) but still have this cruddy summer cold (bad).

Today I went out for sick-lady supplies and stopped at Salvation Army because the one up here is le bomb (good). In there for two dollars I find this absolutely gonzo gorgeous necklace–like, it looks like decorative weaponry for a space crone superheroine (good). I walk out on cloud 9 but as soon as I turn on my car the CHECK ENGINE light starts flashing and Minerva the Wonder Hyundai starts shaking (bad). God’ll get you for that, Walter, I thought, subbing in “vanity” for “Walter” (Maude reference) and nodding at the Legend (who loved that phrase). I run into the tire store down the road to ask where I should bring my car and instead one of the young fellas working there plugs a diagnostic tool into my car and announces (I shit you not), “Not all your cylinders are firing.” (All hail this metaphor called 2019 Lisa.)